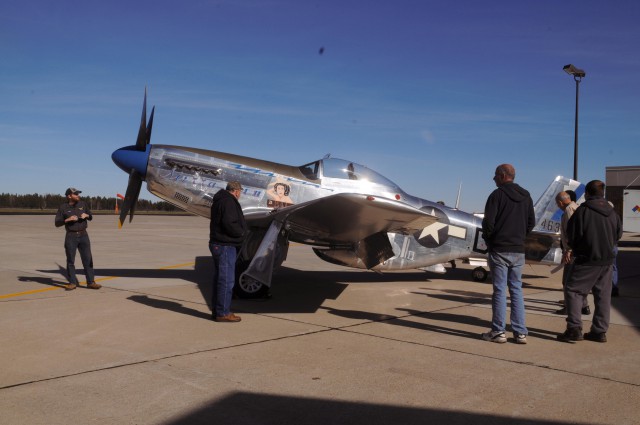 Sierra Sue II stood there innocently parked in a lot of the Bemidji Regional Airport in Minnesota. From the outside Sierra Sue II looked like nothing special – just another P-51D-20NA “Mustang” fighter plane which had seen battle in WW2. No one realized just how interesting it was, and how many stories her silver wings held, until they started taking her apart, piece by piece.

Chuck Cravens, a historian for AirCorps Aviation, was head of a team which had been charged with the task of restoring Sierra Sue II to her former war-time glory. Cravens kept a technical log during the restoration which took a team of 15 people a whopping 26,000 hours to complete. While they methodically worked, all sorts of interesting stories about the history of this plane came out the woodwork or, as in this case, out of the aluminum, so to speak. What started as a mere technical log eventually turned into an entire book – Combat Vet P-51, The History of Sierra Sue II, World War II Survivor.

Sierra Sue was built for the U.S. Army Air Force in 1944 for an original price of $50,000, a lot of money in those days. Its first pilot was Lt. Bob Bohna, who had a picture of a girl he liked in high-school painted on the side of the plane. The girl’s name was Suzanne Lang; she never knew she adorned the wings of the aerial combat plane, as she passed away in January of 2015, before the history of the plane emerged.
Cravens eventually tracked down Lang’s family, which was delighted by the news and came down to see the painting first-hand. Cravens was glad the family took such an interest, saying “How sad would it be if someone’s grandmother was on the side and nobody ever knew”. While they were there, Lang’s family revealed another layer of the fascinating story. Suzanne’s husband, also a pilot, had also commissioned a picture of her to be painted on the side of his jet during WW2, The Bemidji Pioneer reports.

Sierra Sue II was sold to Sweden’s air forces after the war, before being moved to Nicaragua and then back to America, where she was traded several more times before finally coming to rest in the hands of her current owner, Paul Ehlen of Minneapolis.

In his novel, Cravens uses diary entries, year book photos, military documents, and technical engineering papers to present the story of Sierra Sue II’s colorful life. He ensures us the work is a fascinating read. “It’s hard to tell what people want to know, but everyone loves a good sweetheart story.”