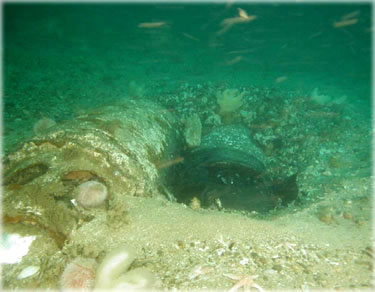 Upon the discovery of four unexploded WWII mines in the waters off the Whangaparaoa Peninsula, Naval divers are tasked with trying to deactivate them.

Japanese and U.S dive teams found the mines by accident 30 meters below sea level during routine training exercises. The mines are not believed to be highly dangerous, they could still be a potential hazard for those who use the harbor. “During World War II, New Zealand set a defensive mine pattern out here,” says Trevor Leslie, Lieutenant Commander of the Navy Dive.

“These mines were swept in 1944 and sunk to the bottom of the ocean. “Since then technology has advanced and they’re now within the range of civilian divers and boaters. So we’re just out here making sure everything is safe for everybody.” TVNZ reports the explosives were placed all over New Zealand during the Second World War to protect the country from foreign invasion.

The navy says 16 mines were laid in seven loops as part of a controlled defensive minefield in September 1942. They were part of a larger defensive maneuverer which saw 1391 mines laid in 10 New Zealand harbors. Most of the mines were disposed of using mine sweepers after the war, but about 50 sank to the seabed.  The navy says the mines are unlikely to be dangerous due to their age and condition but recommends caution if any more are found.