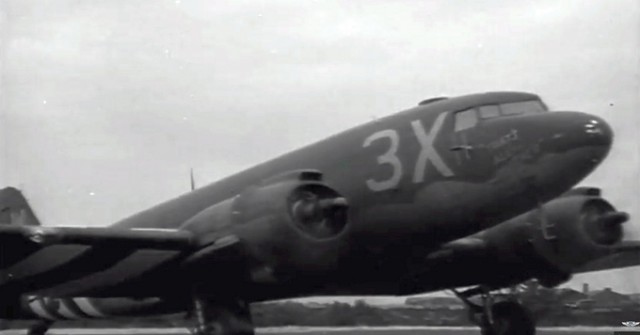 A plane that played a crucial role in WWII by leading the D-Day invasion has been discovered in a scrapyard in United States.

The fate of the historic Douglas C-47 was hanging by a thread when Commemorative Air force stepped in to rescue it. The plane famously dropped first batch of 13,000 paratroopers in Normandy, which helped pave the way for a successful invasion of the beach.

An appeal was launched on crowd funding platform ‘Kick starter’ that managed to raised more then £50,000 in first 24 hours of its launch. The contributors gave money generously towards the restoration project of the Douglas C-47 from the Second World War.

The Douglas C-47 called ‘That’s all Brother’- apparently a message to the Fuhrer- had a pretty busy World War. But its most important task was to lead 800 aircrafts to the Normandy drop zone in the most crucial phases of the D-Day invasion. That’s all Brother, took part in a number of other famous campaigns such as Operation Garden Market and the Battle of Bulge, and made through  mostly unscathed.

Like many other war relics, the iconic C-47 was quickly forgotten after the end of the war. It was swapped between a number of owners and faced considerable wear and tear over the years. It successfully managed to stay under the radar and escaped the keen eyes of war enthusiasts for a long time. Finally the historic plane ended up in a military scrapyard in Wisconsin, and was waiting for its ultimate death.

According to the CAF (Commemoration Air Force) President Stephen C. Brown, the plane was on the edge of certain destruction when it was discovered by the CAF. He added that the hunt for the historic plane took a while but thanks to its serial number 42-92847, the plane was traced to a scrapyard, and that it was only weeks away from being torn apart into countless pieces.

‘That’s all Brother’ was not an ordinary C-47; there was a reason why it was leading the 800 crafts to the drop zone. The accuracy of the site to drop the paratroopers was absolutely crucial especially during the mission like D-Day invasion. That all Brother was equipped with an early form of a navigation radar system, state of the art for its time. This system helped the fleet to make most accurate drop and make a safe return, the Mirror reports.

CAF intends to enable the crippled C-47 to take to the skies once more, 71 years after its historic mission. CAF also says that they want to turn the iconic plane into a flying classroom, and a reminder of a great victory in Europe.