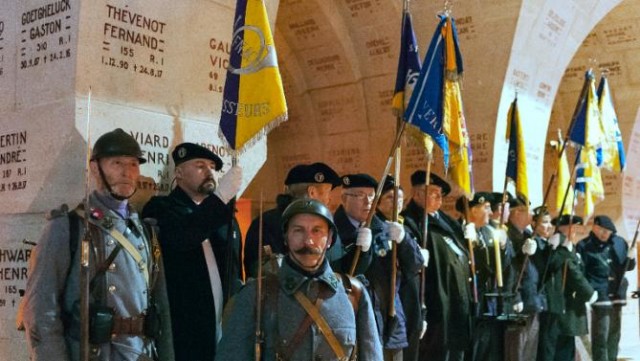 The Battle of Verdun is known for being one of the most brutal battles to have been fought during WWI. In this battle tens of thousands of German and French troops were killed. The fighting lasted some 10 months and strained the resources of France, so that at one point, it was feared that it may collapse and seek peace terms with the Germans.

Exactly 100 years since the first day of combat, France held a joint commemoration ceremony with Germany to honour their fallen countrymen and to educate future generations about the atrocities of war. This event would have been unthinkable even a few years ago. Once Verdun was a symbol of the hatred between France and Germany, but today it has become a symbol of the new spirit of cooperation between the two nations.

The Verdun memorial was specially renovated for this centenary commemoration. Three hundred people dressed in WWI German and French uniforms and they  marched down the lane to the exact spot where the battle started at dawn, 100 years ago to the day. The sound of shell fire was played to re-enact the sounds of the shells fired on that first day of the battle.

It was at this battle that French general Robert Nivelle uttered the now infamous words, ‘On ne passe pas (They shall not pass)’.

Within a 300-day period of relentless bloodshed, 300,000 soldiers from both Germany and France were killed or missing in action and approximately 500,000 others were wounded. On the first day of the battle alone, two million shells were reported to have been fired, with 30 million shells fired in total overall.

The town was selected for attack by Germany’s chief strategist, General Erich von Falkenhayn, because of its position along the Allied line, and to cause maximum destruction to a region which was historically important to the French. The 10-month-long battle between France and Germany is referred to as the ‘hell of Verdun’. Both sides stubbornly refused to give in and it was this reluctance to relinquish any of the ground they had fought so ruthlessly to win that led to the drafting of more troops into combat and the eventual mass loss of lives.

In fact, the battle is reputed as having been so traumatic due to the vast losses of both German and French troops that it was only  in 1984 that the governments of each of the countries agreed to a joint hosting of an annual memorial service.