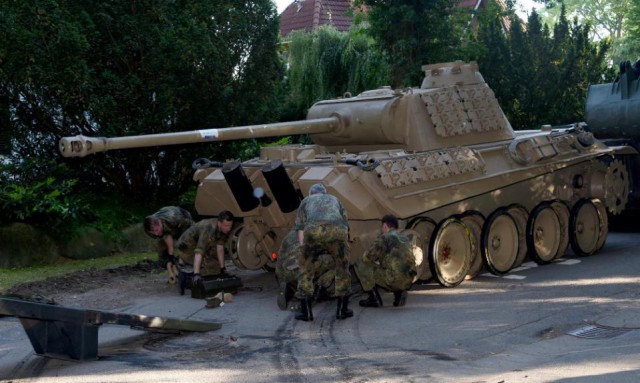 Cellars are usually the host of a number of objects of memories and interests from the past, but some people go that extra mile to satisfy their craving for the past memorabilia. A raid in a German town resulted in the discovery of a Second World War Panther tank along with a number of other weaponry including torpedoes from the underground garage of a local pensioner.

When a Kiel prosecutor suspected the existence of war relics in a villa in the town of Heikendrof, the only way to find out was the police raid. Possession of war relics, or weaponry is banned in Germany and is a prosecutable offence. The raiding party and prosecutors were in awe to find a fully intact panther tank in the underground garage as well as a number of other weapons from the Nazi era.

The villa is owned by a 70 years old man with an interest in the war relics. Local people regard him as a quiet and conservative citizen. Authorities have long suspected the presence of suspicious items under his possession, especially after the reports that the owner of the villa was seen driving his WW2 tank in 1978.

There is not much information coming from prosecutors regarding the amount and nature of other weapons. This is perhaps due to the time required to identify the individual items by the experts from the military. German Army sent special machines to help securely recover the tank from the cellar.

The whole affair was triggered after some Berlin prosecutors searched the villa in question while probing for some stolen Nazi era relics, according to a spokesperson of the Kiel prosecutors, The Local reports.

The owner of the villa and his lawyer have come up with their defense citing that the tank was not in fully operational condition, and could not fire. Hence no law was broken in the process. Prosecutors are very determined that the raid was fully justified and lawful and that war relics don’t belong in underground garages of the local people, especially tanks and torpedoes.

The mayor of Heikendorf, surprisingly refused to pass any judgement on the matter, saying that people have the right to like and collect what they wish. According to some local reporters this sentiment is prevailing among most of the local folks, who always knew that the owner of the villa has some war relics in his possession.