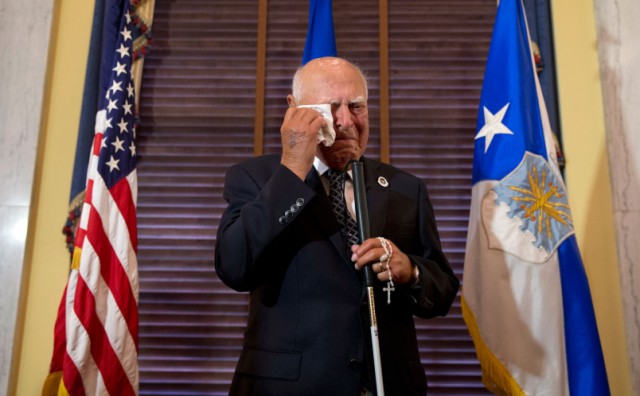 World War Two veterans are being rewarded for their service on the 70th anniversary of the end of World War Two.

John was only 22 years old when he became a bombardier in the US Air Force’s 306th Bomb Group. In 1944, while on a mission over Germany his bomber was shot down by enemy fighters. John and the rest of the crew survived the plane crash, and were on the run behind enemy lines for almost a month before finally being captured by Nazi soldiers. They were interred at a prisoner of war camp, and were liberated the following year by Allied troops.

John had flown six missions over enemy-occupied territory during the war, prior to his B-17 being shot down.

Senator John McCain, who himself was a prisoner of war, said that John and his fellow comrades were an inspiration to modern military servicemen. McCain served as a US Navy pilot during the Vietnam War and spent more than five years as a prisoner of war in North Vietnam.

At 93, John says that he never expected to receive the medal, and said that he never did more than anyone else but was serving his country, the Stars and Stripes reports.

After the war John continued his work in the Air Force, building radar systems for fighter jets. He says he was sad that his wife was not still alive to see the ceremony. The couple had been married for 64 years.

Meanwhile a company of US Air Force crew were also honoured and received the Congressional Gold Medal for their role in a bombing raid in Japan in 1942. Veteran US Air Force Lieutenant General John Hudson received the medal on behalf of the entire company, many of whom have since died.

Another honour went to Lieutenant General Willie Williams who received the Congressional Gold Medal as part of 400 Montford Point Marines who were awarded the medal at the Marine Barracks in Washington, D.C.

Willie says that while he experienced racism and segregation during the war, it only made him and his comrades fight harder. It was during World War Two that President Roosevelt allowed African Americans to join regular combat troops and into the Marines.