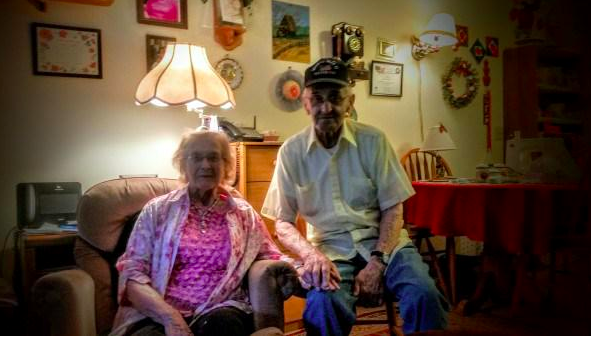 A World War Two veteran had his groceries paid for him pay a grateful stranger.

Eight nine year old Fred Mayhew from Hampden, Maine said that just a few weeks ago he was at his local grocery store queuing to pay for his goods, but when he got to the till the young woman in the queue behind him offered to pay for his shop.

Fred said that he even had his money out ready to pay, but the girl told him to put his money away and that she would cover the cost of his groceries. She then went on to thank him for everything he did during the war.

Fred is well-known as a veteran in the small town of Hampden and people know about his part in World War Two.

Fred said that he couldn’t believe that he was getting his groceries paid for.

As a long term local of the town, Fred is also well-known for his chocolate fudge. He delivers it fresh to businesses around the town, as well as at the local fire station and veterans and old aged pensioner get-togethers – all for free.

This time the young woman was giving a gift back to Fred.  When he arrived home and told his wife Esther that he hadn’t paid for the groceries she asked if he had stolen them. But to her surprise as well Fred recounted the story and told her about the generous girl.

Esther and Fred have been married for eight years.

During World War Two, Fred served with the US Army right at the end of the war through 1945 and 1946. He was deployed to Hawaii and was to serve in the Pacific theatre of war. He saw action with the 7th Infantry Division in Korea and Okinawa against the Japanese. His division were known as the ‘Bloody Seventh’.

Once his tour of duty had ended, Fred was honorably discharged and he returned to the US, The Blaze reports.

Fred is proud of his army service and has his training certificate and discharge documents displayed on the walls at his home.

The couple still do not know who the stranger was, but have expressed their gratitude for a small act of kindness.