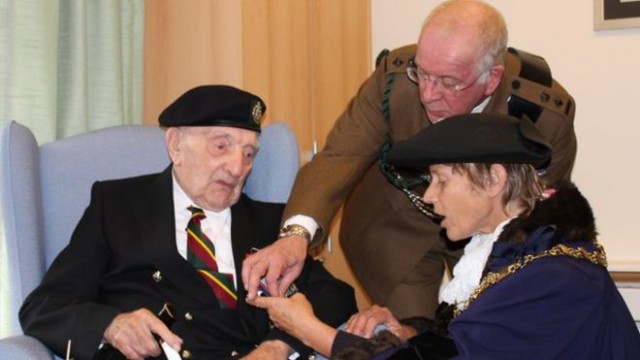 A World War Two British Army veteran has been awarded France’s highest military honour, 70 years after the end of the war.

Sergeant Robert Rigler, who is now 98 years old, received the Legion D’Honneur from the local Mayor of Poole, Ann Stribley, this week.

Robert was awarded this honor for his role in liberating France in the summer of 1944 and for a mission he took part in to evacuate British soldiers from Arnhem in the Netherlands during the war. The mission saved 20 soldiers from German troops and returned them to safety in September of 1944.

Arnhem was the objective of a failed Airborne attempt to seize an intact bridge across the Rhine river. A rescue operation was put into place for the Allied soldiers trapped on the north bank of the Rhine in the nearby village of Oosterbeek where they held out for 9 days since landing. Around 2,500 troops of the British First Airborne Division and Polish Parachute Brigade were evacuated.

Robert was part of the Fifth Battalion Dorset Regiment and was in charge of a rescue boat that was sent over the Dutch Rhine River near to Arnhem to rescue as many troops as they could.

Robert and his mean came under heavy attack from German troops in the area, but they steered the boat across and back over the river two times in order to get more British soldiers out of the city.

During the award ceremony Robert was able to reminisce with fellow veterans including Reg Cossins who is now 94 and also served in the Fifth Battalion Dorset Regiment with Robert.

The award ceremony stated that during the operation the Royal Engineers, who were responsible for the evacuation, had incurred so many casualties that the Dorset Regiment stepped in to rescue as many troops as possible.

The operation took place at night so as to avoid being noticed and evading the German troops, but that meant it was pitch black and to add difficulty it was also pouring down with rain.

The Mayor said that Robert and his regiment remained committed to the rescue regardless of the danger and conditions that they had to battle with. Even though the first boat they crossed in was so severely damaged from enemy fire that it couldn’t be used again, the men found another boat in order to make a second trip.

The Mayor said that Robert showed leadership and total commitment to saving his fellow soldier regardless of his own safety, the Mirror reports.

The ceremony took place in the care home in which Robert lives in Poole in Dorset in the south of England.