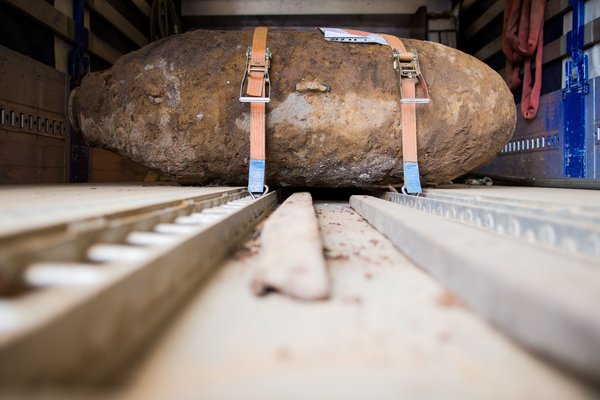 The most recent incident in the North West city of Cologne meant that most of the city centre was blocked off and evacuated.

A 440lb unexploded bomb was uncovered when workmen were digging along Cologne’s riverbank in order to lay new heating pipelines. When they came across the bomb, work stopped immediately, the authorities were notified and a mass evacuation of Cologne centre began. Traffic came to a stand-still, while trains, trams and cars were prevented one of the river’s main bridges. More than 20,000 residents were evacuated from offices, homes, hotels, hospitals and schools.

All residents were asked to gather in the gymnasiums of local schools which had been closed for the day. Once the bomb squad arrived it took around 30 minutes to defuse the 70 year old bomb. The team said that it looked like an American bomb, which would have been dropped in the final months of the war.

While this might sound like a one off occurrence to outsiders, for German residents across the country it has become a regular activity, even though this latest incident in Cologne has been the biggest evacuation the city has ever had to coordinate. This evacuation was one of six or seven incidents that take place in Germany every month.

When devices are found they have to be assessed by the bomb squad and defused or disposed of as necessary, and until they do so life in the surrounding areas comes to a stand-still.

Other unexploded bomb discoveries and evacuations this month have taken place in a town called Erkrath near Dusseldorf when around 1500 locals had to be evacuated from an industrial estate as a 550lb bomb was defused. In Hannover around 30,000 locals were evacuated when an unexploded bomb was found under an old school yard. Meanwhile in Ingolstadt in southern Germany and Kiel in northern Germany have also both had minor incidents of unexploded bombs.

On an annual basis Germany’s bomb squad which operates in the most populated areas of Germany defused almost 1000 unexploded World War Two bombs, grenades and land mines, the NDTV reports.

The discoveries still being made indicate that the country quickly tried to recover and rebuild in the post-war years, covering up any old bombs that hadn’t detonated, rather than excavating and dealing with them at the time.

Munitions clearing experts believe that up to 10,000 unexploded bombs are thought to still be lying under Germany’s foundations.