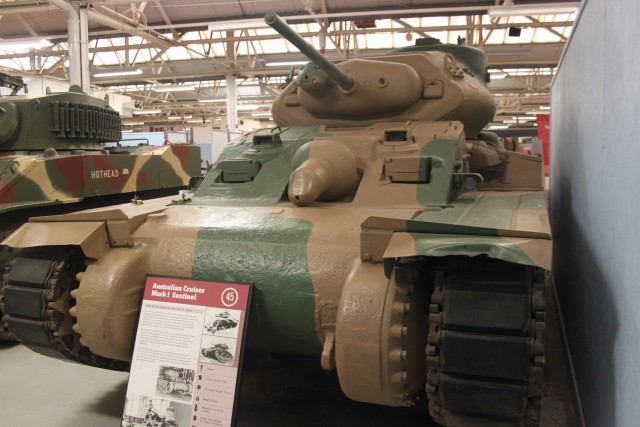 An old industrial suburb of Australia’s second largest city, Melbourne, is about to be converted into a modern estate of apartment blocks. However, it has been discovered that the Melbourne tank factory at Fisherman’s Bend might have made vital contributions to the Allied war effort building tanks during World War Two.

Fisherman’s Bend is situated in Melbourne’s western suburbs on the banks of the Yarra River and is the location of a Department of Defence site as well as other major industrial companies.

Australian Cruiser Mark I Sentinel at the Tank Museum [Via]

Since the area was put up for possible development, researchers have found that the Fisherman’s Bend area was the centre of a top secret World War Two tank programme to manufacture and build tanks for the Allies.

Australia’s National Trust organisation is calling for the area to be protected and says that the authorities should not let developers think they can just come in and bulldoze the site. A factory built for the tank programme is still standing and is part of the development that will be knocked down to make way for brand new housing. It was originally built by Australia’s Department of Munitions to build the country’s first armoured tank.

The factory at 19 Salmon Street at Fisherman’s Bend was actually used to develop test vehicles that could be tested for their capabilities. It produced full replicas made of wood in order to test the vehicles’ manoeuvrability and among the prototypes developed at the factory was the AC1 Sentinel Cruiser Tank Mark 1.

Archive television footage has been uncovered to support the National Trust’s endeavour. One film shows news footage from 1942 when the then Australian Prime Minister Robert Menzies and Army officials inspected the tanks being developed in the factory and surrounding site

The film shows an entire fleet of tanks, artillery and military vehicles being tested on man-made sand dunes near the site. The plan had been to develop a whole fleet of hundreds of tanks, however only 65 were ever produced and none saw active service. Even thought the Australian tank building programme wasn’t a success, the National Trust believes that the site should be protected as a heritage area for its contributions to the war effort, The Age reports.

Later in the war the factory was commandeered for aircraft maintenance by the Australian Air Force. Then after the war it was taken over for building cars by Chrysler and Rootes.

The National Trust does not believe the entire site needs to be protected, but that the original administrative building and part of the factory should be saved.