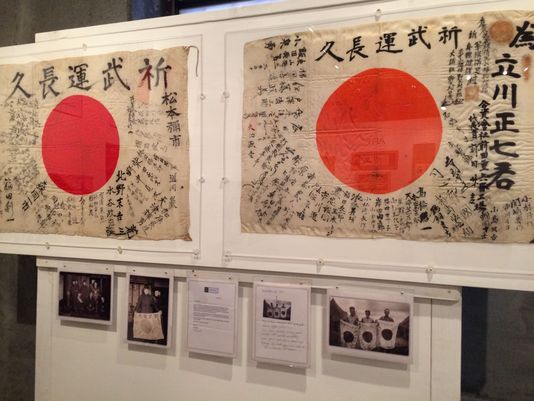 Several items and Japanese memorabilia taken from Japanese soldiers during World War Two by American troops are being returned to the relatives of those they took them from.

Seventy years since the war ended, the US Army veterans are making the trip back to Japan this week and will return the items they took during the war.

Now a Japanese charity OBON 2015 is attempting to get as many of the items returned to the soldiers’ families or relatives. They said that sometimes the items were the only piece left of that soldier who was killed during the war.

Rex and Keiko Ziak are leading the initiative and were motivated to start the charity when Keiko’s family were sent a flag that her grandfather had carried with him until he was killed in the jungle. She says that her family are so happy to have received a remnant from the grandfather who never came back from the war.

When Keiko’s grandmother received the flag she said that her husband had finally returned home. Since Keiko and Rex started the charity, US veterans and the families of veterans have been sending various items back to Japan via OBON 2015. The couple has had to work with Japanese historians and academics that are able to help identify who each flag or item belonged to.

The son of a Pacific war veteran, Ron Gillette, inherited a Japanese flag from his father and he has returned it to Japan through OBON 2015. Even though Ron’s father has died, he says that it is what his father would have done if he was still alive, the KGW.com reports.

Seven US veterans are making the trip to Japan this week and they will take part in a ceremony to hand over their flags and items to Japanese officials. The ceremony is said to be another sign of reconciliation between the US and Japan, as the Japanese company Mitsubishi also formally apologised to US veterans for using them for slave labour during the war.