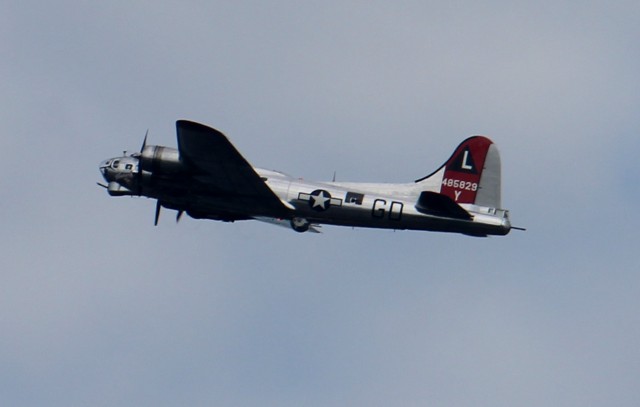 A World War Two bomber veteran gets to fly again in a B-17 more than 70 years after he last flew in the bomber.

George Hartman, who is now 91 year old, was a tail gunner in the B-17 bomber during World War Two. In his last war time flight, George and the rest of the crew were shot down over Germany. They were captured by German troops and were held as prisoners of war for the rest of the war.

Now, this week a B-17 bomber made a special flight to Muskegon airport to pick up George who was to have another final ride in the B-17.

To reward George for his service he was awarded the free flight in the Yankee Lady B-17, as part of an air display based at the airport over the Independence Day weekend.

George said that the special flight came as a complete surprise. George’s son had put George’s name into a lottery that picked his name for the free flight. George said that it had been so long since he was last in a B-17 and that it brought back lots of memories.

George had always kept an interest in the B-17s and had visited many air shows to see them still flying. While he said it was a good experience, he said it brought back a lot of emotions too. He said the memory of being shot down over Germany was one of his worst missions ever.

George said that now looking back war seems such a waste. He said that World War one should have been the end of world wars, but that wasn’t and still isn’t the end of it.

On the mission in which George crashed landed, it was his 24th mission at the end of 1944. He was flying with a full squadron of B-17s flying over the north of Germany. They were headed for Meersburg which was a hub for Germany’s oil refineries and vital to the German’s fuel supply.

George’s plane missed the city of Meersburg but instead hovered of Zeitz nearby. Anti-aircraft fire from Zeitz caught the plane and its engines failed.

Most of the crew ejected out of the aircraft and parachuted to the ground. They managed to avoid enemy troops for around a day, but were eventually caught and sent to Stalag Luft IV for the rest of the war.

George recalled how there were about 10,000 prisoners at the camp and that conditions were terrible. There was little food and most had to sleep on the bare floor, the MLive reports.

George and the rest of the prisoners were forced to take part in the Death March across Germany as Russian troops neared the camp. The march took 86 days and thousands died. George survived and was liberated in May 1945 by Canadian troops.