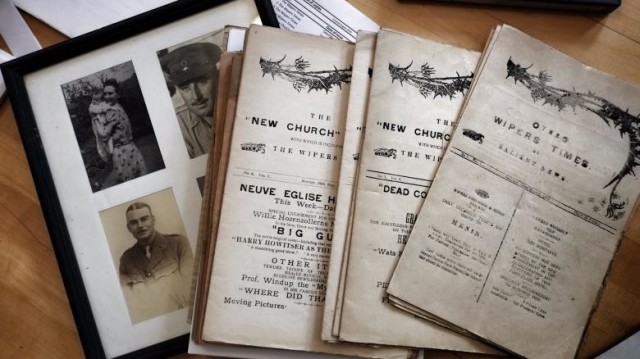 If Capt. Fred Roberts and Lt. Jack Pearson were alive today, one wonders what their reaction would be to the publishing of their newspaper the ‘Wipers Times,’ by a German broadsheet named ‘Die Welt.’ Since the ‘Wipers’ was written in the British Trenches during WW 1 and for the entertainment of the British army soldier, it was not at all complimentary to the enemy – known then as ‘Messrs. Hun & Co.’

In an apparent bid, ahead of the referendum later this year, to “ persuade us [UK] to remain in the EU,”  Die Welt has created a special edition in which the ‘Wipers’ has been renamed ‘The Fritz Times.’(Fritz being a nickname applied to the wartime German soldier.) M. Lengemann of De Welt is quoted as having said, “We are going to show the British that [Germans] can be funny.”

The Fritz Times utilises satire, directed at all walks of British life, from party-goers to holiday-makers, from footballers to  British tourist in Germany and even the Royal family receives a mention. The thinking appears to be that a newspaper can change people’s perceptions of each other  and that the German newspaper is trying to improve British opinions of Germans. The content of the newspaper include the following – “we are grateful that the British rescued democracy in the 20th century. Today we need you for a successful European Union.”

What a far cry these efforts for peace and unity, is from the enmity of WW1 and the life of the soldiers in the trenches. It would have been very interesting to have met the two soldiers, Roberts and Pearson, who during their time spent on the front, much of which was in the trenches, started publishing a newspaper. While stationed at Ypres, they were entrepreneurial enough to have got hold of an old and somewhat rickety printing press which they immediately put to use.

The result was the creation of “The Wipers”, first published on February 12th 1916 – just over 100 years ago. The name was a play on the English Tommy’s pronunciation of Ypres, in Belgium, the scene of vicious fighting. Perhaps these two men were looking for an outlet for their wicked humor, or just a way of coping with the horrors of war. Maybe their idea was to inform or to simply entertain the troops whose life in the trenches was anything but pleasant.

In spite of the most restrictive military censorship, it came to be seen as the ‘unofficial’ newspaper of the Western Front. There were stark anecdotes of life in the trenches, often orders were subtly questioned and many of the senior commanders were mercilessly lampooned. The newspaper was filled with snippets of news using false names of people and places which would be fairly readily recognised by the men in the trenches.

Sports reports, such as imaginary games of golf being played in no man’s land appeared. Various musical evenings, to be presented by ‘famous persons’ bearing nicknames applied to the enemy artillery fire, such as Little Pipsqueak or Duddy Whizbang, were advertised and a number of fictitious correspondents were invented. A regular column, that published supposed letters was included and replies to them concocted. There was even a hilarious ‘Agony Aunt’ column published under the title of Cupid’s Corner – all of which was greatly enjoyed by the soldiers.

A number of other persons were involved in the writing of material for this newspaper. There were a few journalists happy to contribute, the engraver, Couzens, was responsible for the some of the artwork and submissions were requested, with an overwhelming response, from the soldiers themselves. Humour and satire were the order of the day – a most entertaining newspaper. Not surprisingly the very first issue was sold out immediately

Roberts and Pearson were attached to the Sherwood Foresters, so as their battalion was posted to new positions the printing press was taken along too and the name of their newspaper changed accordingly. It was thus known at various times as the Kemmel Times, the Somme-Time, the New Church Times and the B.E.F. Times. The last publication was printed at the close of WW1, in December of 1918 and named the Better Times – full of hope for a better future.

Both Roberts and Pearson fought in the Battle of the Somme and both survived the war to return home. Both men were awarded the Military Cross.

Roberts’ grandson remembers that his Grandfather would speak little of the war itself– but was always happy to talk of the various newspapers he and Pearson published. He recalls his Grandfather as being a person that was always fun-loving, full of zest for life and very much of a risk-taker, even it seems, from the time before he went to WW I, when he was involved in diamond mining. He moved to Canada and died in Toronto in 1964 at the ripe old age of 82 years.

Of Pearson, little is known other than that he moved to South America, where he ran a hotel in Argentina. He died in 1966.

Collections of these particular war-time newspapers have been published and recently the BBC has dramatised the story of how these newspapers came to be published in the trenches of WW1. The ‘Wipers Times’ lives on.

Finally – it remains to be seen whether this gesture by ‘Die Welt’ in remembering the ‘Wipers Times’ in its ‘Frits Times’ publication, will make a difference. For that, we will have to wait on the outcome of the upcoming referendum to see whether the United Kingdom votes to remain in or to leave the European Union.