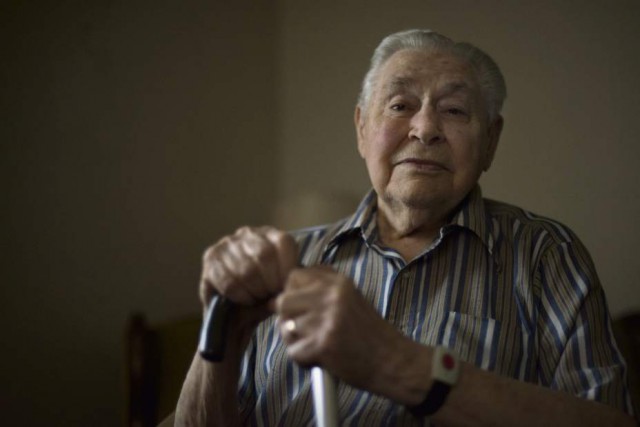 On November 26, 1943, a German bomb dropped by a Luftwaffe plane hit the allied ship HMT Rohna. The British-made troop ship was carrying American soldiers to the Southeast Asian theater of World War II.

Two Army Air Force buddies, Camdon Inks and Leonard Deutsch, knew they were going into the water. “Whether you went over the side yourself or you went down with the ship,” Inks, now 95 years old, recalls. They realized they had only one option – abandon ship!

Inks and Deutsch, along with many other shipmates, put on life jackets, climbed down the cargo nets, and threw themselves into the cold Mediterranean Sea. Inks knew his predicament – he had never learned to swim. But Deutsch, a competent swimmer who could have gotten away easily, stayed with him and instructed Inks to keep paddling his arms.

The Rohna listed starboard and finally went down into the sea. “I looked back and saw the bow go under,” remembers Inks. “But we were far away enough it didn’t suck us in.”

Night was rapidly approaching. The two were floating in the middle of the open sea. They could see nothing else in the quickly fading daylight but a mass of panicking troops fighting for survival amid the rough, unforgiving Mediterranean Sea. Inks adds, “The breakers were hitting you in the face. One minute you felt like you were down in the bottom of a bowl, and the next minute you were up on a crest.”

Only eight life boats had been able to launch from the Rohna. And hundreds of soldiers were swarming each in an effort to survive. They were climbing on top of each other, crying out for their mothers, and just grappling to find something to hold on to. Inks, Deutsch, and two others managed to grab on to a twelve-foot-long wooden plank.

They kept floating for hours amid the oil slick from the sunken ship. Slippery and struggling to hold on to their makeshift life preserver, they became more disoriented with each passing moment and felt the cold seeping into their bones. In the middle of the night, Deutsch ordered Inks to open his mouth and shoved in a piece of chocolate.

Then, suddenly, a rescue ship appeared! A light from the ship lit up the men on the plank, and someone threw them a rope. Inks got hold of the rope and began pulling himself and the plank towards the ship.

“They got a hold of me and they had a rope and they tried to put it around my waist,” Inks said. “It went around my neck, and they pulled. Damn near hanged me, but they got me up. I was as slimy as could be with oil. They stripped me down to my birthday suit and wiped me down with a towel and took me down and threw me in a hammock and put a blanket over me. They gave me a sandwich. Found out later it was a sardine sandwich. I thought it was the best thing I ever ate in my life,” Inks recalls.

The next thing Inks knew, it was morning. Immediately, he went looking for Deutsch. But Inks couldn’t find him. He kept asking sailors, anyone he could find, about Deutsch’s whereabouts. Finally, he found someone who was there during the rescue in the night. Inks was the only one they had been able to rescue. The others had slid back into the water, the Trib Live reports.

“He was a swimmer. He may have even swum to [a rescue ship] and got on it like some of the other guys did, but he held back to help me. And we were talking all the time, bolstering each other’s courage while we were in the water. And, like I said, he gave me candy,” Inks says. “I just think he was a good friend. I owe my life to him.”

Deutch was one of the 1,149 people who had died that night. Even today, Inks prays for him every night. He knows that were it not for his friend, he would have been the 1,150th soldier to die.

Inks can’t stand water anymore and he has never learned to swim.