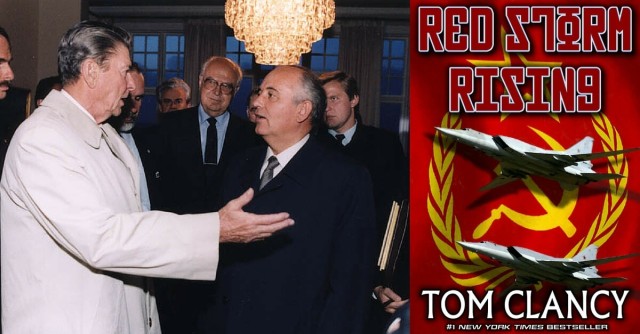 During the Cold War, President Ronald Reagan read an unusual book to gain insight on the Soviets. It is true that before any international meetings, presidents will read to gain knowledge about their opponent. They often read a history or a reference book. Generally, presidents have to be briefed quickly before each meeting.

One particularly crucial Cold War meeting was the meeting between Reagan and Mikhail Gorbachev in Reykjavik in 1986. This was where the two men would discuss a way to end the Cold War, or, at least, reduce the nuclear arsenals that were such threats to world peace and the future of the globe

To prepare himself, Reagan read a book by the well-known author Tom Clancy. The story was about World War III between NATO and the Warsaw Pact – obviously a work of fiction by a prominent writer of fiction.

Reagan was an avid reader and had been reading Red Storm Rising just before his meeting at Reykjavik. Many people believe that this book had clouded his judgment at a crucial juncture in the Cold War. Prime Minister Margaret Thatcher had actually written in a document that it was true that Reagan thought the novel depicted the Soviet Union’s intentions very well. Reagan had talked to Thatcher about the novel just before the Iceland summit.

The meeting at the Icelandic capital was one of the most important meetings in the series held between Reagan and Gorbachev. This summit was a series of discussions between the East and the West of whether or not to eliminate the nuclear weapons. After the summit broke up without an agreement, initially Reykjavik was declared a failure.

While many believe that Reagan’s reading of the novel right before his meetings made him decide to adopt a hard-line policy towards the Soviets. It will never be known just how much the novels Regan read have influenced his decisions. The facts are such that it does show , that the president may have confused fact with fiction in interpreting Gorbachev’s plans and actions. In one of the documents, it stated that Reagan did not trust the Soviets’ motives. He believes they were attempting to stop the United States’ research into strategic defense, the ‘Star Wars’ initiative, that would have meant that America was safe from a nuclear attack.

Red Storm Rising is about a war fought with nuclear weapons. It features a Soviet-style chairman who makes Washington an offer on arms reduction, however he is secretly planning a war during those very meetings. This seems to have greatly influenced Regan as he saw similarities with Gorbachev and his policy.

Many believe that Reagan’s use of a fictional novel as his way of understanding the Soviets was reckless and dangerous and could have had a negative impact on East-West relations. Not all agree with this. The novel was a work of fiction, but in fact it offered Regan real insights into the Soviets. After Clancy’s novel had been released, readers began to see how much the author actually knew and understood Cold War strategy and technology.

Apparently, Red Storm Rising was written with expertise regarding military secrets, such as Clancy’s treatment of America’s stealth bombers and the USSR’s Typhoon-class nuclear submarines. Many government officials were not even sure how Clancy got that information – whether it was leaked or was a result of the author’s fertile imagination.

It turns out that Clancy had written everything in the novel based on a naval warfare board game. Not one bit of Clancy’s information was classified government information. This means that Regan based his policy on the imagination of a writer. In hindsight. it seems that the world missed an opportunity to limit the risks of a nuclear war because of a novel.