After seven decades, the boy rushing toward his father who was then marching off to join the Second World War, Warren (Whitey) Bernard, revisited the B.C. street corner where the image that awed the world was taken.The photograph, also known as Wait For Me, Daddy, was taken in New Westminster, B.C, on October 1, 1940. It was taken by Claude Dettloff, a photographer for the Vancouver Daily Province. The photograph became one of the most famous images in Canadian history.

Bernard was then five years old when the photograph was taken. He broke loose of his mother’s grasp as his father was headed to war. Bernice, his mother, was with him when his father, Pte. Jack Bernard, marched down Eighth Street with a parade of other men to join the B.C. Regiment to war.

Bernard, now 79 and lives in Tofino, returned to New Westminster for a dinner prepared in his honour. He returns to the scene where he, as a young boy, made history. He can still recall the day he made a break for it. He can still remember his mother’s emotions as well. “She was pretty upset because I guess over here the soldiers were all milling around and everybody was saying goodbye — and then they were heading for the ship.” 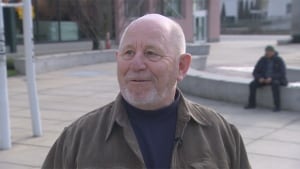 Warren ‘Whitey’ Bernard, now 79, standing at the very spot in New Westminster where his iconic photograph was taken when he was still a young boy.  (CBC)

The photograph became featured in the next day’s morning paper. It also became a highlight in many papers across North America including an October issue of Life Magazine. The image also became a feature in many schools in B.C. The image showed the world the impact of war on families. For Bernard as a young boy, it was more than that.

His father’s regiment was assigned in Nanaimo, B.C., for training. After that, they were set off to war in Europe. Bernard and his mother were able to see through the war living on a modest income and renting a home in Vancouver.

During the summers of 1943 and 1944, he joined a touring group that encouraged people across the province to buy war bonds in order to support the war effort and the soldiers overseas.

Then and Now by Adam Surrey from Ghosts of History

Bernard is now donating his memorabilia to a local museum. The historical item tells of the life of families during war 74 years has passed. “I think the right thing to do is to have the stuff archived properly in the city where the picture was taken,” he said.

Rob McCullough, of the New Westminster Cultural Services Department, said that the story of Bernard is easily understood and identified with the people around the world. “Emotions such as love, separation of family, the relationship between a father and son are things that are cross-cultural,” said McCullough. “And, by bringing those things into our museum we can then begin to tell the stories of people who lived in our community or impacted our community in some way.”

For Bernard, the war ended when his farther came back home safely. He wants the image to last and his memory of that day to be preserved for the coming generations. 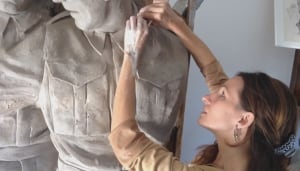 Three sculptures commissioned to make up the commemorative monument about the photo of Bernard. (CBC)

The City of New Westminster is working on making a commemoration of the iconic photo with a monument. It will be built near the exact spot where the photograph was take near the intersection of Eighth Street and Columbia Street. The monument is designed with three statues which depicts the boy, his mother and his father. The sculptures were created by Canadian Edwin Dam de Nogales and his wife, Veronica, in one of their studios in Barcelona.

The CBC News reports that the city also plans to unveil the monument later this year. After the unveiling, there will be a re-enactment of the soldiers’ march which will be done in 2015 in line with the 70th anniversary of the end of the Second World War.