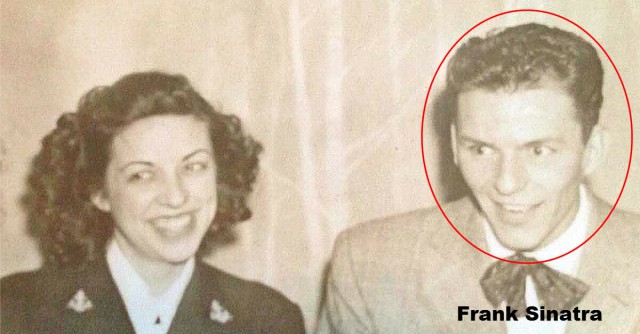 Is it possible Frank Sinatra would be crooning a tune to the girls in the Navy? Yes indeed. It happened at the Woman Accepted for Volunteer Emergency Service (WAVES) at 609 Sutter, San Francisco, CA in 1945. Delores Day was serving in the WAVES to help with the war effort. The beautiful, shy young war widow was in the right place at the right time to meet the up and coming star performer. The event was the biggest the WAVES had ever undertaken and Delores was nervous.

Less than one year prior to Sinatra appearing in San Francisco, a handsome Navy sailor named Sonny Day was on leave and visiting his home in Kansas City, MO. Delores Robinson was a friend of the family and was invited to join the celebration. Sonny’s mom tried to convince Delores to run up to him at the train station and give him a big kiss! This was way out of her comfort zone, so she chickened out. But sparks flew between the two young people.

During the next few weeks, the two were inseparable. Delores fell for Sonny “like a ton of bricks.” He apparently was in love also. In fact, after he traveled to Boston for his next assignment, he called Delores and asked her to be his bride. She boarded a train and they married in a church ceremony the same afternoon she arrived there. He had everything arranged.

Living in such a big city was exciting for the Midwestern girl. But soon Sonny shipped out leaving his bride alone. He boarded the “Dehaven” in Boston and left his bride behind. Delores made some friends, and worked at the upscale Filene’s department store, which later became part of Macy’s. However, after a few months, she became homesick and moved back to Kansas City with her parents.

She landed a job at an aircraft manufacturing plant just outside Kansas City. Everyone hired learned to rivet, whether they were to be in the office or building airplane wings. This supports the “Rosie the Riveter” mystique. Delores worked in the Pattern Department where workers would check out patterns to tool parts for the B-24 airplanes built at the huge facility.

Working the “Swing Shift,” from 3:24 a.m. to 1:24 p.m., Delores enjoyed having afternoons off work. But one day only a few months after becoming a war bride, the telegram no one wanted to receive arrived. The “Dehaven” was missing in action having been sunk in the Battle of the Coral Sea. Later she heard a few survivors were saved, but Sonny was considered to have gone down with the ship.

The young woman was devastated. Her handsome Navy husband was dead. She was a widow at twenty-two. Delores soaked up comfort from her family and friends and grieved. She continued working at the plant, feeling driven to contribute something to the war. Trying to stay busy, she often went out with friends. Finally, she gave up on the possibility of Sonny coming home. One afternoon she was headed downtown to shop when a friend asked her to stop by the WAVES recruiting office and pick up some information.

To her own surprise, before she left that office with the information for her friend, Delores signed on the dotted line and became a member of the WAVES. Feelings of patriotism and a need to do something more filled her heart. Her mother registered her complaints and forbade her daughter to travel outside the country to a war zone. Ironically, the friend who originally requested the recruitment information did not join!

Delores boarded a train and journeyed to Hunter College in New York City for basic training. There, she and many other women learned Navy procedures, reports, and protocol. After graduation, she was sent to Cedar Falls, IA, which she said seemed like the coldest place on the planet. Later, she was transferred to the Navy Supply Depot near Salt Lake City, UT and was secretary for a Lieutenant. The officer’s wife befriended the still shy woman, and Delores often served as babysitter for the couple.

When the Lieutenant received orders to leave Utah, he asked Delores where she would like to go—and promised he would do his best to send her there. She had been to New York and Boston, and her mother would never agree to her leaving the continental United States. Remembering a childhood friend from Missouri was living near the Golden Gate Bridge, she asked for San Francisco.

There was Delores, living at WAVES headquarters! She became a member of a group which sponsored and arranged entertainment for the big brass and WAVES personnel. She met some great ladies there and had as good a job as one could ask for during the war.

Frank Sinatra was to perform for the Old Gold Hour radio program, which was broadcast from WAVES headquarters. While he was there, Delores and a few others had to run interference to keep people from swamping the entertainer. Sinatra was delightful, she says, he was always joking around. After the broadcast he suggested they all go get something to eat.

Delores couldn’t quite believe she was sitting in a taxi cab, white gloved hands folded in her lap, with Frank Sinatra right beside her. She remembers all the six or so people with Sinatra being extremely nice and that he was a “perfect gentleman.” They went to the Fairmont, a luxurious, Nob Hill restaurant where screens were brought to surround the table to prevent people from staring or interrupting the party. All the other WAVES were “green with envy!”

The entire group returned to Sinatra’s hotel suite. Delores had already decided she and the other WAVE representatives would make a quick exit as soon as they could politely do so. Being in the star’s hotel room was way out of all the women’s comfort zones.

Before they left, Delores walked down the hall with Frank Sinatra by her side. A pair of women walked toward them and passed by. One stopped and said, “That guy looks just like Frank Sinatra!” The other asked, “Well, is it him?” Delores and Sinatra kept walking. He leaned toward her and asked, “Hey, have you seen Frank Sinatra?”

Delores didn’t miss a beat. “Why, no, I’ve never even heard of him!” She walked him to his hotel room door, then retreated back to be with her friends, laughing all the way. Delores loves to tell this story to eager listeners, and graciously granted permission for this article.

After being discharged from the WAVES, Delores returned to Kansas City, and met the man who would become her husband. He served five years in the service, and asked her to dance. They married and had four children. Delores, now 93, lives with her daughter in Texas.