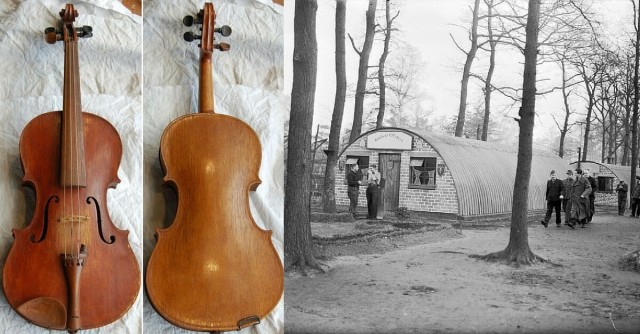 A violin made by a German prisoner of war interned at the High Garret camp in Braintree, Essex has been lovingly restored by Russell Stowe of Woodbridge Violins in Suffolk and has recently been played, for the first time in years,  by Jonathan Morton who said, “It just sings out at you.”

No one seems to know who the violin maker was, but the prisoner of war camp at Braintree housed German and Italian prisoners, several of whom may well have been violin makers before being drafted into the army. The story goes that the prisoner that made the violin, could not take it back to Germany with him so he gave it to an officer stationed at the camp to say thank you for being allowed to make it. This officer then gave it to the parents of the current owner of the violin, David Powell who lives in Woodbridge.

Stamped inside the violin is the date 1944 and the phrase “Hergestellt in Englischer fangenschaft” (Made in English captivity). It sounds different to other instruments of a similar age as it is made from a type of mahogany, instead of the normal pine or maple, and pieces of what appears to be packing crates. The violin had been finely crafted by a master artisan and it required very little in the way of repairs before it was ready to be played.

It is such a pity that there are so many unknowns in this story. The restorers can only guess at where this very skilled artisan found the wood and how did he get the glue and tools with which to carve? When did he find the time to work on such a fine piece as prisoners were expected to work in the fields six days a week?

Food was scarce and the English weather could be miserable for men that had little protection from the elements. How did this violin maker create such a magnificent piece under these conditions? Why was such a labour of love not taken back to Germany? Who was the compassionate officer that was originally given the violin?

Sadly so much of this story of a thing of beauty that rose out of the ashes of war has been lost. An object that has the ability to drown out the sounds of guns and rockets with the sweet sounds of Strauss or Tchaikovsky or the gay folk tunes of Germany was crafted in stolen moments by a man whose soul could not have been destined for war.

One can only hope that when he returned home he was once again able to take up his trade and produce many more violins that may well grace symphony orchestras today and bring pleasure to countless today.