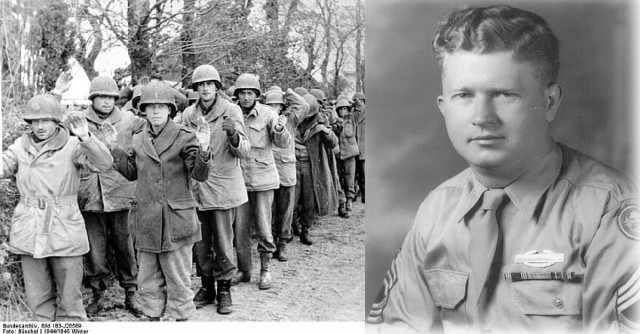 A World War Two veteran from Knoxville, Tennessee, has become the first American soldier to be honored for saving the lives of Jewish prisoners of war.

The Wehrmacht had an anti-Jewish policy, singling out Jewish POWs from the rest of the POW population. On the Eastern Front, many Jewish POWs were sent to extermination camps or murdered. This policy was also applied in some cases in the West. In January 1945, the Germans announced that all Jewish POWs in Stalag IXA were to report the following morning.

Edmonds, who was the highest ranking soldier in the American section of the camp ordered all his men, to fallout the following morning – Jews and non-Jews alike. When the German camp commander, Major Siegmann, saw that all the camp’s inmates were standing in front of their barracks, he turned to Edmonds and exclaimed: “They cannot all be Jews!”

To this Edmonds replied: “We are all Jews.” Siegmann took out his pistol and threatened Edmonds, but the Master Sergeant did not waver and retorted: “According to the Geneva Convention, we only have to give our name, rank and serial number. If you shoot me, you will have to shoot all of us, and after the war you will be tried for war crimes.” The Commandant turned around and left the scene.

Seventy years after World War Two ended, Roddie is being awarded the highest military honor that Israel can award to non-Jews who risked their lives for the Jewish people during the war. He will be the first American to be awarded the honor, and it is being awarded posthumously since Roddie died in 1985.

The Yad Vashem Holocaust Museum has organized the honor for Roddie and says that even though Roddie may have seemed like an ordinary soldier, he took on a huge task in defying the Nazis.

Roddie did not speak much about his experience during the war, and his son did not know about his actions until a long time after his death. Roddie was part of the 422nd Infantry Regiment and had been captured and imprisoned by Nazi Germany after the Battle of the Bulge in 1944. He spent around 100 days in the prisoner of war camp. His experience was unveiled when Roddie’s son discovered his war diaries, in which he had kept a daily log of his imprisonment.

Further, it was through a newspaper article that his son realized what his father had done. In the article, a New York lawyer commented that Roddie had saved his life and that of many other Jews during the war. Two of the original prisoners of war that had been held with Roddie were located, and they told their story to Roddie’s son.

They had been held at the Stalag IXA prisoner of war camp at Ziegenhain, Germany. Roddie knew that there was a danger that if the Jewish prisoners of war became separated from the rest, they would be sent to extermination camps, which was the experience many other prisoners faced during the war.