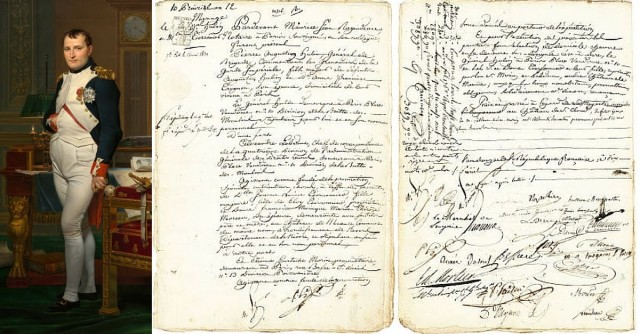 Napolean Bonaparte was born in Corsica – at that time ruled by the French – in 1769. Napoleon’s parents were comfortably off, but by no means wealthy; his father Carlo had been an active member of the Corsican resistance movement against the French occupation, but when their leader fled the country Carlo Buonaparte befriended the occupying forces – an exercise in self-preservation.

The young Napoleon went to a military academy in France when he was nine, and despite his small stature, he survived what must have been a daunting experience. He attended two other academies before finally graduating, aged almost 16, from the military academy in Paris. Carlo Buonaparte died soon afterwards, leaving his family financially destitute. In his 20s, he adopted the more French-sounding Napoléon Bonaparte.

Napoleon became head of the family, and his military career began to flourish. By December 1793, aged just 24, he had become a Brigadier General in the French army. In 1794, he was appointed as inspector of artillery in the French army of the Alps, and in 1795 he met attractive, 18-year-old Désirée Clary.

They became engaged, but before they could be married Napoleon was introduced to Josephine Tascher de la Pagerie, who was the mistress of Paul Barras, one of the most powerful men in France. Napolean fell hopelessly in love with Josephine and asked Désirée to release him from their engagement. She complied, and in 1796 Napoleon and Josephine were married.

Described at the time as the most alluring woman in Paris, Josephine was 32, and already a widow. She had children by her first husband and probably saw marriage to Napoleon as a means to obtain financial security for herself and her children. She undoubtedly realised that Napoleon was destined for greatness, and she set out to help him, using her beauty and sophistication to counteract his often brusque manner.

It was a spectacularly successful partnership, but Napoleon wanted an heir, and by 1809 Josephine – then aged 46 – had failed to deliver. Napoleon decided they must divorce, and although Josephine was distraught, was resolute.

The couple were divorced in 1810, and one of the world’s most famous love stories was over. Napoleon went on to marry Marie-Louise of Austria, and Josephine retired to her estate at Malmaison, France. She died there, aged 51, in 1814.

The famous couple’s marriage contract has survived, and on Valentine’s day, 14th February 2015, it goes on sale in Palm Beach, Florida, with a price tag of $20,000.