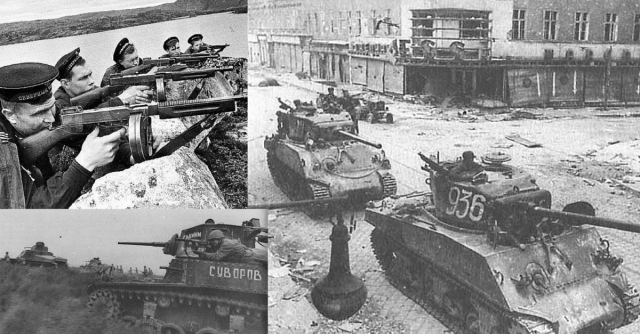 Despite the fact that United States and Soviet Union were not on the best of terms prior to the Second World War, the conflict in European continent brought the two nations closer. Soviet Union’s role in the Second World War was undoubtedly crucial. United States decision of a love-hate alliance with Stalin proved to be a right one especially when the events in 1945 unfolded.

Up until the very end of 1939, any possibility of an alliance between US and Soviet Union seemed a far-fetched idea. When Stalin signed a non-aggression pact with Hitler, sentiments in US grew stronger against Soviet Union’s leadership. The relationships grew sourer in September 1939 as the eastern Poland was seized by Soviets. A Few weeks later Stalin launched the ‘Winter War’ against Finland and further angered US leaders. It was at this point that President Roosevelt publicly condemned Stalin by calling his leadership ‘a dictatorship as absolute as any other dictatorship in the world’. In spite of the fact that Stalin was clearly leaning towards Nazis, President Roosevelt never lost sight of the fact that Hitler was a bigger threat to civilized world then Stalin.

After the fall of Paris, Roosevelt grew extremely wary of the Nazi’s ambitions for a continental dominance and saw Hitler as the biggest enemy. US started a series of talks with Soviets to discuss the terms of a better relationship in the future. Although US did not accept Soviet Union’s new borders that included parts of Poland and Finland, however US agreed to lift the embargo as a goodwill gesture. It was during one of those talks that US Under-Secretary of State Summer Welles warned Russian ambassador Constantine Oumansky of a future Nazi invasion on Soviet Union. During a congressional debate concerning the Lend-Lease bill in first quarter of 1941, President Roosevelt fought against the attempts to exclude Soviets from receiving US aid, the Global Research reports.

The invasion of Russia did come, and Nazis launched a surprise attack on a much inferior Red Army in June 1941. Hitler was completely aware of the military capabilities of Stalin’s Army and was determined that Russian campaign will be just a walk over. All the other world leaders thought on pretty much the same level, however, President Roosevelt took a bold step and dispatched his trusted aide Harry. L Hopkins to Moscow to discuss the situation with Josef Stalin. In the US, War Department had briefed the President about the Soviet’s response to the war, saying that Russia could only last a couple of weeks against a much stronger Nazi Army. However, after holding two sessions with the Soviet leader, Hopkins urged the President to side with the Russians and release the Lend-Lease aid. The first installment of the aid was on its way by the end of October. Soon after that United States entered in the Second World War and openly allied with Russian, British and other European countries.

The whole episode of US-Soviet ties before, during and after the war is as peculiar as it is complex. It was almost like United States and Allies had to choose from two devils, and decided to shake hands with a less intimidating but equally ruthless tyrant.