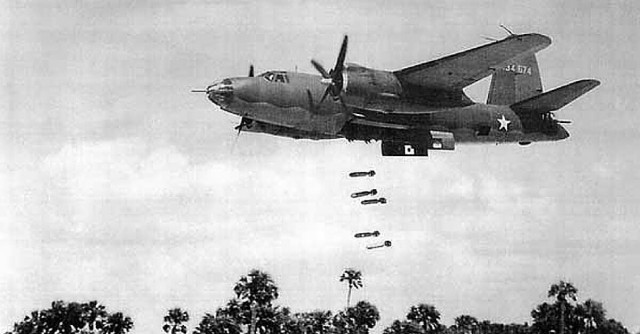 Henry Jennings was a World War Two aerial engineer with the US Air Force.

A resident of Lubbock, Texas, Henry remains a staunch aviation enthusiast with model B-26 bombers around his home.

Henry has a huge amount of experience with the twin-engine B-26 bomber, as he was trained in them and in turn he went on to train hundreds of others on the mechanics of the aircraft during the war.

After entering service with the US Army, the aircraft received the reputation of a “Widowmaker” due to the early models’ high accident rate during takeoffs and landings. The Marauder had to be flown at exact airspeeds, particularly on final runway approach and when one engine was out. The 150 mph speed on short final runway approach was intimidating to pilots who were used to much slower speeds, and whenever they slowed down below to what the manual stated, the aircraft would stall and crash. But Henry says everyone who flew in her appreciated the room they had inside.

Henry had just graduated from high school in 1940 and two years later was drafted as part of the US’s entry into World War Two. Henry was rejected by the US Navy, and at 6ft 5in he was too tall to be a pilot, but he knew that he didn’t want to join the ground forces.

Henry joined the US Army Air Corps as an engineer, and the B-26 bomber with its masses of space inside was the perfect fit for Henry.

Henry says that the B-25 was made for small people, but the B-26 was ideal for bigger people like himself. Historians say that Truman, who was Vice President at the time, didn’t want the B-26 put into production. But when Jimmy Doolittle tested it, he wrote to Truman stating that it was a wonderful plane, and that it was dependent on having good pilots flying it.

Even though production of the B-26 went ahead, Truman didn’t authorize for any of the B-26s to be returned to the US.

After 100 hours of flying time, Henry did take a flight test and passed and that meant that he could fly the B-26 without having to have a crew chief with him. He flew the B-26s across the country and would go on three to five day trips to deliver the aircraft to whichever bases needed it. He was never sent across to the Pacific or Europe.

Henry recalls how many new pilots found the B-26 difficult to fly. He says that the B-26 needed experienced pilots who knew about flying, but many of the newcomers wouldn’t even have 200 hours of flying time behind them, the Daily Record reports.

It is for these reasons that the B-26 did start to have a bad reputation and the pilots felt like they were alone and had to rely on their knowledge when flying the aircraft.

When the war ended, Henry says everything was grounded and they were all given the weekend off. He went on to work in his father’s furniture store before retiring in 1986.