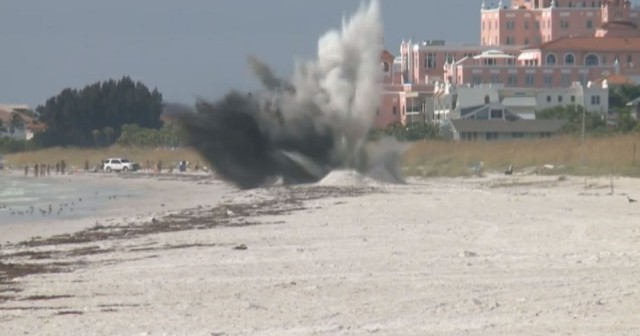 Unexploded ordnance from World War Two is a common find in Germany, France and Britain, but it is rarely seen on the beaches of Florida. Nevertheless, an unexploded bomb has been discovered beached on a Gulf Coast shoreline, near Tampa, Florida.

The bomb was discovered covered with barnacles and it’s thought to have been in the sea for some time. Authorities evacuated the area and called for the bomb squad to make the bomb safe.

Bomb experts arrived at the beach on Sunday morning and conducted a controlled explosion that made the bomb removable from the site.

Luckily, no one was hurt in the incident, but unexploded bomb finds are much more prevalent than expected. Even though the US mainland was, in general, too far from the frontlines of Europe or the Pacific to be impacted or affected by direct enemy attack, it is thought that millions of war-time unexploded bombs lurk in the Atlantic off the East Coast of America.

Many come from the US itself, when the military was allowed to dump its bombs in the Atlantic prior to 1970, after which it was banned. After the war, the US found it had a huge amount of unused bombs and explosives. Without a use for them, they were dumped in the Atlantic around 50 miles away from the shoreline. Even though they had to be pushed to the bottom of the sea, many gradually become dislodged and drift in the sea’s current.

Another lethal military weapon that has been dumped at the bottom of the sea is mustard gas, which was used during the Vietnam War, the USA Today reports.

Records show that unexploded bombs have been washed to the shoreline of more than 11 US states to date.