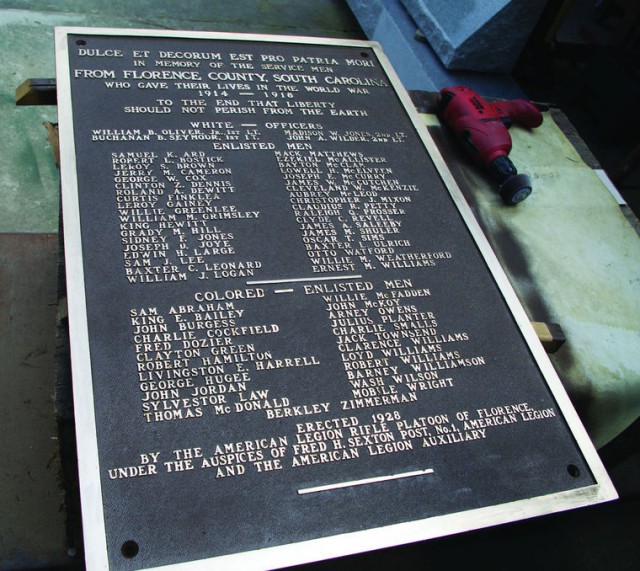 The Florence, South Carolina city council meeting was forced into a tense, emotional and deeply personal discussion over plans to move a controversial World War I monument into the Florence Veterans Park.

The monument in question is under dispute as it depicts a list of local fallen soldiers from World War 1, but next to the names it also distinguishes the soldiers based upon the colour of their skin, stating whether they were white or “colored” people.

The decision comes shortly after the Confederate flag was removed from the Statehouse grounds, and has sparked an emotional debate about whether accepting the memorial would be retaining history for posterity at the expense of people’s legitimate discomfort.

“Separate but equal is not considered honorable,” said Councellor Octavia Williams-Blake, “What can we do to honor these soldiers the way it should have been done back then?”

The mayor himself was even worried about the damage the monument could do to people’s psyches. “I’m very concerned that regardless of intent, that we may unintentionally cause those clouds of inferiority to form in young minds if we erect this plaque anew,” said Mayor Stephen Wukela.

Despite the obvious tension that such a monument would cause, almost half of the council argued that the plague should remain unchanged.

“African-American is a word not even invented in 1928. History is history, not what we feel about it today,” offered Charles Bethea, the commander of Post 1.

He was supported in his view by Bill Pickle, political commentator, who said “I do understand the history of prejudice and racism,” he said, while offering the view that “it’s not right to change this plaque.”

After a series of emotional discussions the proposition went to vote and in the end the council voted 4-3 to approve the installation of the unchanged monument, with one stipulation – a secondary plaque will be added in an attempt to provide a historical context and to mitigate any offense caused by the language used on the monument.

But for some a secondary plaque wasn’t enough; it was step in the wrong direction, the scnews reports.

Williams-Blake said that she could never imagine taking her young daughter to a park that honored segregation between soldiers. “I’m thinking about what that would do to her soul,” Williams-Blake said. “A second plaque can’t explain enough to wipe away those feelings.”