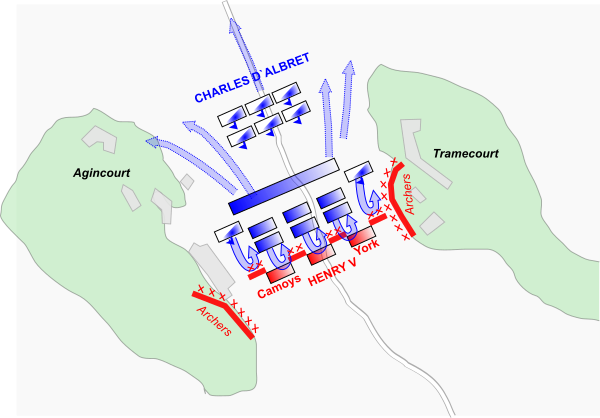 The Hundred Years War fought between France and England through the fourteenth and fifteenth centuries saw a number of important and impressive battles as several generations of soldiers took to the battlefields, but no battle was more impressive than the battle of Agincourt. On an English invasion of France, King Henry V had brought a well-trained and disciplined army comprised of 1-3 thousand heavily armored men at arms and around 5,000 specifically picked longbow archers. After some campaigns in France the English army was met by a much larger French army ranging from 12-30 thousand men including over ten thousand armored knights of which several thousand may have been mounted.

On top of being faced with an enemy that outnumbered them by two to one on the most modest estimates, the English army was plagued by sicknesses including dysentery, and had marched an average of 13 miles a day for over two straight weeks. The main disease running through the English camp was dysentery. Dysentery is a disease which mainly causes intestinal inflammation leading to excessively frequent and uncontrollable diarrhea. Other symptoms were vomiting, fever and abdominal pain; the tough, tested veterans in Henry’s army could handle the fever and fatigue but the constant loss of bowel control presented a problem on the eve of an already ominous battle.

The English set up their position on one side of a narrow field which lay between two forested areas. The narrow approach allowed the limited number of men at arms to stretch across the front while the archers took stationary positions on the flanks, angled inward and with a row of protective wooden stakes.

Thanks to their stationary position, the archers suffering from dysentery simply dropped their pant to more easily relive themselves. As the French knights and men at arms approached the English they traveled through narrow muddy fields and up a slight hill which pushed them together and slowed their advance. The professional English archers fired an incredible amount of armor piercing bodkin arrows at the French.

The almost ninety degree angle of attack allowed the arrows to catch vulnerable points in the armor such as neck and knee joints as well as the meeting of the breast and back plates. In addition to the armor piercing arrows, it is thought that the archers also dipped their arrows in their diarrhea as a form of biological warfare and also for psychological impact.

Thanks to the archers bravely and resolutely manning their posts despite crippling and potentially fatal illnesses, the French were all but defeated by the time they reached the English front lines. As the exhausted and depleted French met the English men at arms in the deep mud, the lightly armed archers decided to attack on the flanks and made short work of the exhausted knights by stabbing at vulnerable spots with daggers or simply overwhelming lone knights. The conditions for the archers at the start of the battle were dire, but they simply dropped their pants and did what needed to be done.