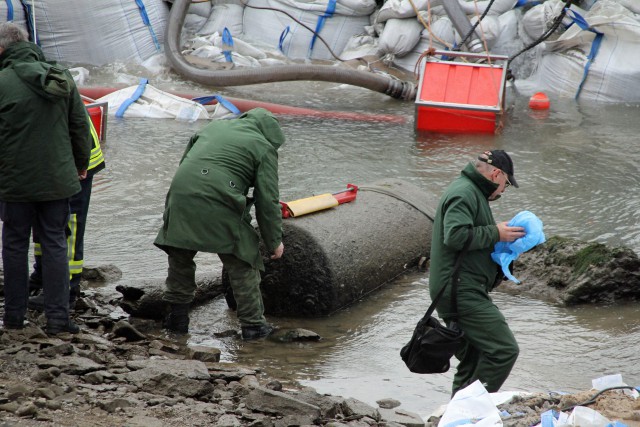 German bomb-disposal experts are the busiest in the world. Each year they deal with more than 2,000 tons of high explosives – mainly Second World War Allied bombs – that are found in the ground all over the country.

Between the outbreak of the war in 1940, and its end in 1945 British and American aircraft dropped more than 1.3 million tons of bombs on Germany. Some targets were heavily bombed; Cologne was subjected to 262 separate air attacks, in the course of which 34,711 tons of bombs were dropped on the city by the Royal Air Force.

Dresden received four attacks in three days during February 1945 during which some 1,200 Allied aircraft dropped almost 4,000 tons of high explosive and incendiary bombs.

The pattern was repeated in cities all over Germany. At Kassell, where 1,800 tons of bombs were dropped in a single night, Pforzheim, where 83% of the town’s buildings were destroyed in just over twenty minutes. Berlin was targeted on 363 occasions, and Hamburg, where 9,000 tons of bombs caused the notorious firestorm that reduced over eight square miles of the city to smoldering ashes.

Not all the bombs detonated; many of them failed to do so for one reason or another, and one type of bomb was particularly prone to failure. The chemical long-term detonator bomb, developed by the allies, was designed to explode hours – or sometimes days – after it fell. It relied on a chemical reaction in the detonator, and if the bomb came to rest at the wrong angle, the reaction didn’t take place.

When one of these is found, it is a major problem. One small movement could detonate the bomb, so sometimes it has to be blown up in situ. That means evacuating people – sometimes thousands of them – from the surrounding area.

In 2011, a 1.8-ton unexploded bomb was found on the riverbed in Koblenz, and 45,000 people had to be evacuated – including the inmates of a prison and patients from a hospital.

Experts estimate that there are still approximately 250,000 unexploded bombs lying under the ground in Germany, and every construction project begins with a survey of the ground to determine what lies beneath the surface.

Large amounts of state and Federal money goes into research to find these bombs, and the situation is getting worse. As time goes on, bombs are corroding and becoming less stable. The chance of spontaneous explosions is real and growing.

Finding the bombs before they reveal themselves in this way is truly a race against time.