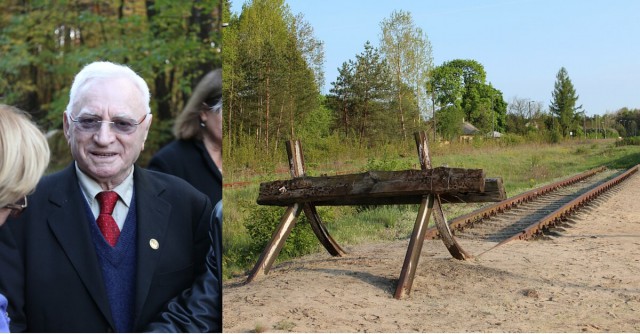 Thomas Blatt , a well-known survivor of the Nazi Death Camp at Sobibor, has died at the age of 88. In WWII he was taken to this major Nazi camp in Poland along with his father, mother and younger brother; his entire family were killed in the gas chamber. Somehow, Thomas alone survived the terrible ordeal of imprisonment and the “Final Solution”.

Thomas Blatt was well-known for his lectures on the Holocaust. He published books on the subject and supported a campaign to protect the site where Sobibor once stood. Sobibor had been established as an important part of a crucial extermination phase of the Holocaust, Operation Reinhard, in which most Polish Jews were to be murdered in gas chambers. Sobibor was also one of the few recorded places where imprisoned Jews staged an uprising against their tormentors.

Blatt was born in the Polish town of Izbica on 15th April 1927. Most residents there spoke Yiddish; like so many European Jews before the war, his family were not devoutly religious. The Nazis forced the Jewish residents of the town into a ghetto in 1942, when Thomas was 15 years old. Once in Sobibor, Thomas was assigned jobs to carryout, while the rest of the Blatt family was immediately gassed to death. After six months, the uprising occurred, with most of the Nazi guards being killed and about 300 of the prisoners escaping. Most of those were hunted down and killed. Thomas Blatt was one of about sixty who managed to survive until the end of the war.

Up to a couple of years before his death Thomas Blatt would visit his Polish fatherland – he had a daughter there and would also visit the site of Sobibor to help restore it. He was one of the witnesses at the widely reported trial in 2009-2011 of John Demjanjuk, suspected of being a Ukrainian commandant at Sobibor. The allegation couldn’t be proved before Demjanjuk died; Blatt had said he would not have been able to remember the guards at Sobibor in any case.

Thomas Blatt was living in Santa Barbara, California, and died at home on 31st October 2015. He leaves behind three of his children and a number of grandchildren, Breaking News reports.

Blatt had said that he had never managed to escape from Sobibor, even in his dreams. A long-time friend of his, Alan Heath, described Blatt as modest and quiet. He said that although his friend suffered from depression and was dogged with nightmares, he never harboured feelings of vengeance at the loss of his family or the way many of his non-Jewish countrymen had allowed their anti-Semitism to twist them into complicity with the Nazis in the rounding up of Polish Jews.

Heath pointed out that his friend Thomas had always said people should not bear hatred towards others. “He certainly bore no malice towards Germans, and urged others to do the same,” said Heath.