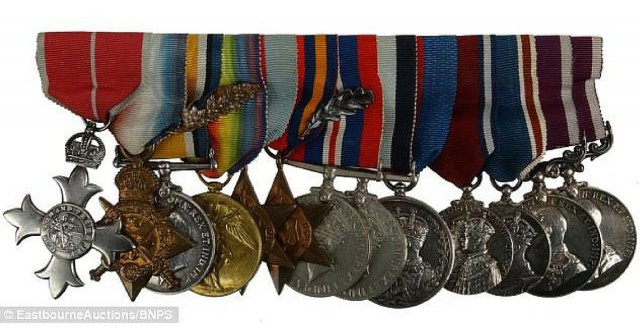 Robert Collie not only survived the Somme where the Allies lost 57.000 men the first day and fought at Ypres salient in World War One. After being wounded in the third Battle of Ypres he was left for dead on a pile of dead bodies at Passchendaele until a medical officer saw his body twitching and saved him. Robert had been shot in the stomach and was thought to be dead.

Robert was treated for his wounds and was sent back to the front line, spending another year in the trenches. After World War One, Robert went on to serve in India and finished his military career as a Major.

Robert’s oldest brother fought with the Canadian Army during the war since he had moved to Toronto before the war began. He had six children, and his body was never recovered, but he is thought to have been killed in action in 1917 at the Battle of Vimy Ridge.

Robert’s younger brother joined the Gordon Highlanders Regiment and died from leg wounds in 1916. Not only did Robert lose both his brothers to the war, but also a sister who was killed back at home in a Zeppelin bombing raid.

Originally from Scotland, Robert’s son has now told of his father’s extraordinary story of survival. He says that he can’t imagine how his father must have felt losing all of his siblings to the war. Apparently Robert rarely spoke about the war, but his son was able to recover a lot of information on the internet about his life and service.

In his spare time, Robert had become a boxer and had also been given awards for the sport when he served in Calcutta, India.

After the war in 1933, Robert lost his wife to tuberculosis. Robert met his second wife in India, married, and had children with her. He became a qualified accountant and left all of his military medals to his son, who sold them in 2013 in an auction.

Auctioneer Jeanette May said to the Daily Mail: ‘Major Collie’s is a incredible story that is tinged with great personal tragedy and sadness yet he mustered up the strength to carry on fighting.’