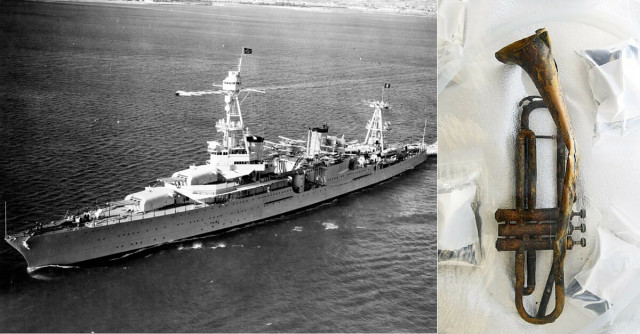 It doesn’t look like the sort of thing that would have historical secrets locked inside. In fact, it looks more like the kind of thing your grandmother would be unable to sell at a garage sale, even for a few pennies.

But according to senior Navy conservators at the Washington Navy Yard, it could become a major part of World War II history. It’s a B-flat trumpet manufactured in 1934. The trumpet’s bell is destroyed and its mouthpiece is gone. The body of the trumpet is covered in cracks and dents..

It was recovered from a sunken U.S. Navy ship that vanished beneath the waves during World War II. It appeared in the Navy Yard two and a half years ago after an Australian scuba diver found it in the wreckage of the USS Houston, a cruiser that sank off the coast of the island of Java in the South Pacific. The ship was President Franklin Roosevelt’s reputed favorite Navy ship and served as the figurehead of the American Navy in the Pacific – symbolic of America’s naval power in the interwar years.

But the ship was sunk only three months after Pearl Harbor, when it and an Australian vessel, the HMAS Perth, accidentally sailed into the middle of a fleet of Japanese fleet in the middle of the night. They were sighted by the enemy ships and bombarded from all sides.

The Houston lived up to the best traditions of the American navy, firing signal flares at the enemy when it ran out of shells for its guns. But the two ships were hopelessly outnumbered and outgunned. Both ships sank, first the Perth, then the Houston, a few minutes after midnight on March 1st. The year was 1942. Over 500 sailors perished beneath the waves. The rest of the crew, almost 300 sailors, finished the war in terrible Japanese prison camps.

But why is this trumpet so important?

Robert S. Neyland, head of underwater archaeology at the Navy Heritage Command, believes that the scrapings taken from the trumpet could contain clues about its owner, if DNA evidence has survived on the surface or on the inside of the trumpet. It sounds like a long shot, but according to experts like Neyland, it’s not unheard of for DNA evidence to survive in such situations.

Experts agree that finding the DNA evidence could be tricky – they’d have to find a part of the trumpet undisturbed by corroding salt water, and then locate descendants of the person who played the trumpet, but they nonetheless agree that the prospect of being able to extract such specific evidence from this little old piece of metal are tantalizing. The trumpet is also helping to keep alive the memory of the heroic crew of the USS Houston.