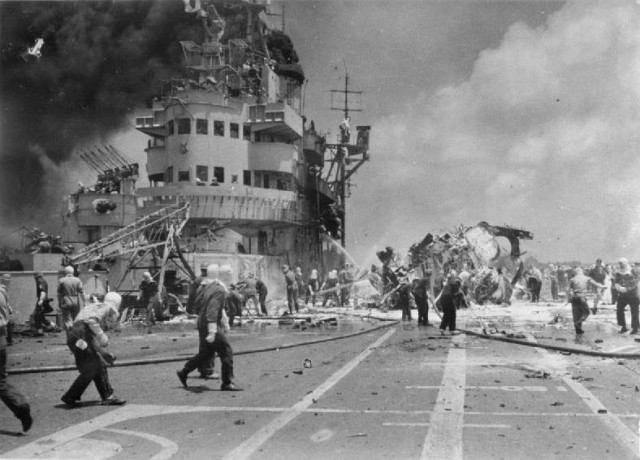 When VE Day was declared in Europe, the war still wasn’t over in the Pacific. World War Two continued throughout Asia as the Allied forces fought the unrelenting Japanese Imperial Army.

Japan’s most lethal weapon was its kamikaze suicide pilots, US military, along with the Royal Navy continued on the fight.

The British Pacific Fleet was one of the largest Roya Navy fleets to be brought together to put an end to World War Two once and for all.  It consisted of four aircraft carriers, many smaller ships for back up, and the biggest air strike crew in British naval history. More than 250 aircraft were transported to the region along with over 10,000 sailors and aircrew.

The Royal Navy adapted American aircraft to use on its aircraft carriers, since there were few British-made aircraft left in operation as the war in Europe came to an end.

The fleet set sail in early 1945 from Sydney, Australia and made its way north to meet up with the US 5th fleet. Because the fleet would be away from land for extended periods, a fleet of supplies ships followed the fleet to deliver supplies and equipment from the nearest mainland.

When the fleet reached the US fleet, the Americans were about to invade Okinawa, from where they planned to launch a mainland attack on Japan.

It was the British fleet’s job to hunt and destroy kamikazes whether in flight or on the ground.

The Japanese knew that they did not have the aircraft or personnel to fight the Allied air forces, so they created the lethal kamikaze to combat the incoming enemy. A Japanese pilot might have only made just two missions in his lifetime, since they gave their lives by crashing their planes into Allied vehicles, vessels and troops. It also gave them better odds of hitting and destroying ships compared to using bombs.

When the US invaded Okinawa, the British fleet located a fleet of 20 aircraft on its radar flying at just 8,000ft and flying at a fast speed.

Crew members recalled how they were scared but did their duty, since they knew the Japanese were not afraid to die. The ship’s radar room would radio the coordinates of the enemy aircraft to the Allied pilots. The last line of defence was the ship’s own anti-aircraft gunfire.

Dogfights would fill the sky, which became full of thick smoke, making it even more confusing for the pilots. Between April and May 1945 all British aircraft carriers in the Pacific were attacked by the kamikaze aircraft.