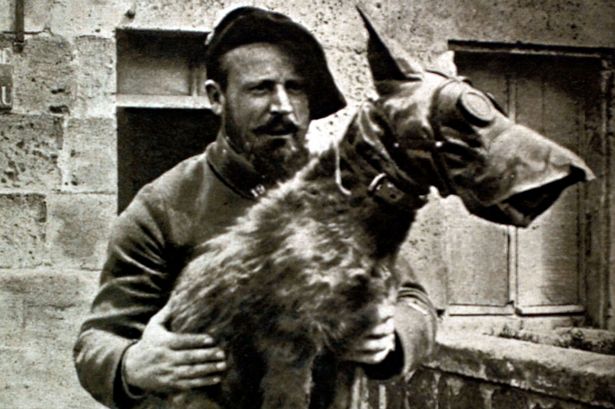 A courageous World War I war dog was widely hailed a hero, after battling bravely through no man’s land to deliver a life-saving message to French troops during the Battle of Verdun in WW I.

The wonder dog, named,  rather, strangely, Satan, was assigned the dangerous task of delivering the message from French commanders, that contained the words that would bring vital relief to the besieged soldiers under heavy attack by the Germans.

The life-saving message read: “For God’s sake hold on. We will relieve you tomorrow.”

With gas mask in place, two baskets containing carrier pigeons on his back, and a brass tube attached to his collar with the communication securely stored inside, Satan dashed determinedly towards the desperate men.

Employing the skills he had been trained to use, Satan zigzagged his way through a hail of bullets fired by German soldiers, whose single-minded aim was to bring him down before he could complete his mission. Despite his best efforts Satan was struck twice in his legs; the second bullet’s impact broke his right foreleg, causing him to fall heavily to the ground.

The French soldiers, who were following Satan’s plight and mentally willing him on, peered helplessly from their trenches in horror at the sight of the fallen dog. Satan’s master, Duvalle, was one of those soldiers. He recognised the dog as Satan, immediately understanding that this was no apparition that these weary men were seeing before them. He knew from his experience as a war dog trainer, having previously trained another messenger dog just like Satan, the importance of Satan’s safe arrival. The lives of countless men depended on this dog!

In an act of selfless bravery, Duvalle sprang from his trench and shouted beseechingly to the dog: “Satan, have courage my friend. For France!” His words were all that Satan needed; he miraculously got up and continued his run towards the men. Duvalle was not so fortunate; he was killed by sniper fire the instant that brief and rousing speech left his mouth.

Of Satan’s moment of truth, war reporter Albert Peyson Terhune would write: “No longer could he travel so fast or use the bullet-dodging gait his trainer had taught him…. [But he] refused to die while his errand was still uncompleted and…he was too loyal to quit.”

Satan eventually reached the troops and delivered the all-important message. The grateful and relieved captain wrote the coordinates for the location of the German gun battery. He wrote that he would hold on, but pleaded for them to take out the guns. He made a second copy of this note, placed each one in the tubes attached to the pigeon’s legs, then released the birds. The Germans were expecting the pigeons and instantly shot one down. The second bird made it back to the commanders at HQ.

Within a couple of hours the French army had defeated the Germans, bringing the bloody, atrocious battle to an end. All because of the bravery of one dog.

The Battle of Verdun was one of many battles during World War I that used trained war dogs. Upwards of 50,000 canines bravely performed duties such as carrying messages, hauling ammunition carts, and standing guard at the top of the trenches. Sadly, we do not really know what happened to Satan. It’s rumoured that Satan either died as a result of his injuries just after his mission was complete, or that he made a full recovery and retired from the army a war hero. What we can be certain of is that, this dog’s bravery will never be forgotten.