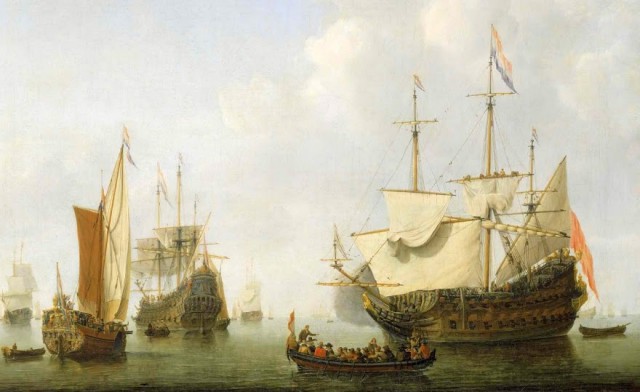 The south-western extremity of Great Britain juts out into the Atlantic Ocean’s warm Gulf Stream waters. Some 30 miles out to sea, to the west of the Cornish headland of Land’s End, lies a tiny cluster of islands called the Isles of Scilly. Only five of the islands are inhabited, with a combined population of just over 2000.

This is the unlikely setting of the longest war in history. It began in 1651 and lasted until its resolution in 1986. Hence, it is now simply called the 335-Year War. Perhaps it is slightly misleading to call it a war, for it was entirely bloodless. Yet, in fact, a state of war did actually exist all those years. The adversaries in this conflict were the Isles of Scilly and the Netherlands. This may seem to be a mismatch, although the Isles of Scilly would have had England at its back, of course.

The middle of the seventeenth century was a time of turmoil in England, with the gory and divisive English Civil War in progress. This war saw the Parliamentarians, under Oliver Cromwell, opposing the Royalists, who supported the King, Charles Stuart. The Netherlands had made a pragmatic decision to support the Parliamentarians, who they deemed were likely to win in the conflict. This action offended the Royalists, because they had considered the Dutch to be their allies. They took revenge by interfering with Dutch shipping in the English Channel.

Cromwell’s forces were gradually gaining the upper hand, so that by the year 1651, the king’s supporters had been quelled throughout  much of the country, until barely anywhere but Cornwall remained secure in the king’s hands, Scilly remaining a safe harbour for his navy.

In this state of affairs, the Netherlands recognised an opportunity to assert themselves and demand that the English crown pay them reparations for their mercantile losses caused by English raids in the Channel.

The Royalists’ response displeased the Dutch, so the Admiral of the Dutch fleet, Maarten Tromp, was despatched to the Isles of Scilly, declaring war on the isles on 30th March that year. By some accounts, Tromp had already been given authority to take this action by the Dutch Republic; by other accounts, he acted on his own initiative and awaited approval to declare war, while he blockaded the Scilly ports.

By June 1651, however, the Parliamentarians had achieved further successes and Robert Black, Cromwell’s Admiral, was able to demand the surrender of the king’s navy. Scilly thereby returned to the control of Cromwell’s armies. The Netherlands withdrew their blockade and Tromp returned home.  However, they made a vital mistake. They omitted to rescind their declaration and make peace with the Isles of Scilly.

A state of war therefore continued to exist for the next three centuries. Then in 1985, Mr Roy Duncan, a historian working in Scilly, was curious to find out more about this situation. He sought help from the Embassy of the Netherlands, and several documents were unearthed which confirmed the existence of a state of war between Scilly and the Netherlands, the Historic UK reports.

The Netherlands ambassador, Mr Rein Huydecoper, was quickly invited to the islands and the signing of a Treaty of Peace between the Netherlands and the Isles of Scilly was carried out there on 17th April 1986. This marked the official end of this obscure 335-year-long war between two unlikely adversaries.