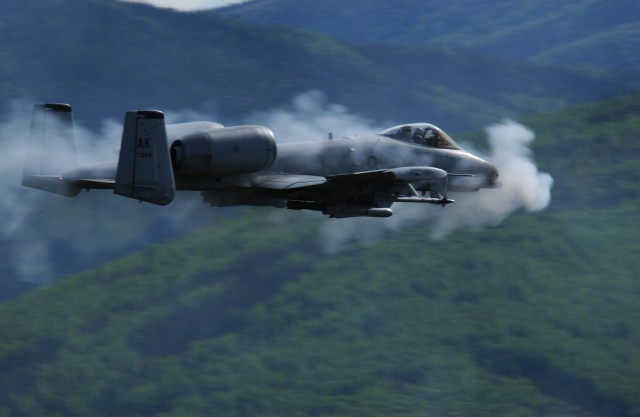 Since the civil war in the Ukraine began 2014, tensions between the NATO countries and Russia have increased.

Now, the United States, as part of the NATO force, has deployed further military presence in the region, including vehicles, aircraft and troops.

It has just announced that around 12 A-10 Thunderbolt II military aircraft are being deployed to the region as part of Operation Atlantic Resolve, which is the name of the mission to balance and prevent further hostility from Russia and its rebels within Eastern Europe.

In addition military exercises by both sides have been conducted. Around 5000 NATO troops from 11 member states took part in the biggest drill since the days of the Cold War. The exercise is to last one month and will include a number of war game exercise in Central and Eastern Europe.

US Marine Corps’ equipment and vehicles recently arrived in Bulgaria in preparation for the exercises. Industry insiders suggest the activity is more for NATO’s member countries in order to reinforce the alliance’s capabilities and enforce confidence in the region, against an increasingly hostile Russia.

It was when civil protest overturned the Ukrainian pro-Russian government and replaced it with a pro-Europe regime that Russian forces entered the Crimea and took control of the area, since they did not want the area to come under control of Ukraine’s new government. Later, rebels in the eastern part of the Ukraine held up the fight against the new government.

Russia denies all support for the rebels, however there is strong evidence that the Russian military has supplied them with equipment, munitions and even troops. To date around 7000 people have lost their lives in the conflict.

In February this year, a truce was agreed and fighting has decreased, but small pockets of fighting continue and the Ukrainian government is concerned that a full rebel attack may occur in the future, the News.com.au reports.

With increased US military in the region, Russia has retaliated by massing more military equipment and troops along its borders with Europe. It has even positioned short-range ballistic missiles in Kaliningrad, which puts the Baltic States and Poland within target range.

The A-10 aircraft deployed by the US is a surprise since it is a dated aircraft. It was originally built in the 1970s and was about to be scrapped by the US military, but had been postponed by US politicians.