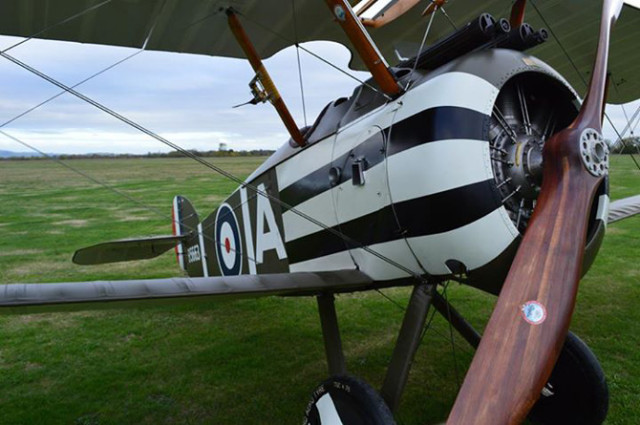 The Sopwith Camel was a British biplane fighter that was introduced to the western front in 1917. This single-seat plane was manufactured by the Sopwith Aviation Company and was powered by a single rotary engine. The 0.303” Vickers machine-guns synchronized to fire through the propellers and, in the hands of an experienced pilot, it was both manoeuvrable and deadly.

The plane was never designated as a Camel by the Sopwith Company; this nickname was given to the plane by the pilots and it referred to the hump made by the metal fairing that was placed over the guns to protect them from the freezing conditions at a high altitude. The plane was of a conventional design for that time and consisted of a wooden fuselage that had plywood panels around the cockpit with the rest of the fuselage, wings and tail covered in fabric. This little wood and fabric plane was credited with almost 1300 kills before it was surpassed toward the end of WW I by the German Fokker DVII.

All in all over 5000 of these planes, in various models, were built and almost 100 years after they took to the skies over Europe, only one remains in a good enough condition to be restored for flight. There are seven planes used as stationary displays and there are many replicas flying today but there will be only one original plane in the skies, out of all those that fought for England early in the 20th Century.

The Vintage Aviator based in Masterton is a restoration and manufacturing company whose mission is, according to their website, “To build WW1 aircraft, engines and propellers to the same exacting standards they were originally made over 90 years ago.”

They received their Sopwith from an American Museum and for the past year it has been lovingly restored back to flying condition. The plane has been painted in the colours of Squadron 10 of the Royal Naval Air Service and as soon as it has been certified for flight it will take pride of place during The Vintage Aviator Flying Weekends.

A Senior Tour Guide, Mr Scott Thompson, told The New Zealand Herald that the Sopwith Camel had the reputation for a “rotten temper and poor personal hygiene”. It was difficult to learn to fly and it cost many airmen their lives while they tried to iron out the quirks and problems of each plane.

Pilots in the RAF joked that the Sopwith Camel offered a choice in crosses; a wooden cross, a Red Cross or the Victoria Cross. However, they would all have been pleased to think that one hundred years later a ‘camel’ would still be flying.