Across Germany and especially in Munich, the city where they were most active, people remember and honor, by  naming streets, monuments, even a top literary prize after the Scholl siblings and their bold protest group White Rose. To many Germans and to many other people around the world now, they are a symbol of bravery and moral conviction in the face of  immensely powerful oppressors like the Nazi government of Germany.

They wouldn’t be complicit, they couldn’t be silent. They called out evil, brutality, and the blind, deluded fascism of the Third Reich right up until the moment the guillotine finally ended their cries for reason, peace, and freedom.

Secretly, a handful of students and one professor from the Ludwig Maximilian University of Munich and a few other supporters wrote seven leaflets (five distributed by the group, one after their capture, and one unpublished) stating the horrors of the Nazi Government and demanding that the German people recognize and to stop the Nazi terror. The group used bold language to denounce the government as seen below,

“For through his apathetic behaviour he gives these evil men the opportunity to act as they do…. he himself is to blame for the fact that it came about at all! Each man wants to be exonerated ….But he cannot be exonerated; he is guilty, guilty, guilty!… now that we have recognized [the Nazis] for what they are, it must be the sole and first duty, the holiest duty of every German to destroy these beasts” (Source: wikipedia.org).

This is a quote from the second leaflet written, printed, and distributed by the White Rose. It shows the intensity with which they opposed the Nazi regime and their demand that Germans see beyond the  propaganda and see the truth. 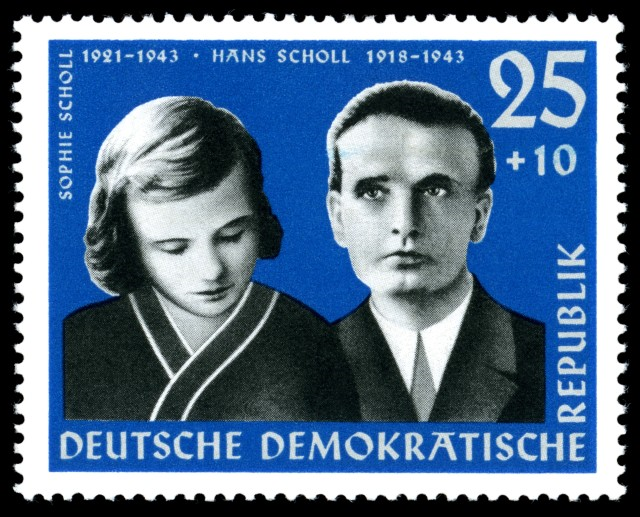 An East German stamp from 1961 honoring Hans and Sophie Scholl

They were Catholic, Orthodox, Lutheran, Buddhist, some inspired by anthroposophy, Eastern philosophies or by the terror of time spent fighting at Stalingrad. Alexander Schmorell, who wrote much of the group’s material, was even canonized as a New Martyr by the Orthodox Church, his holy image depicting a cross and a white rose in his hand. 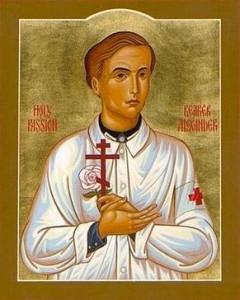 Alexander Schmorell depicted as a Martyr

The first leaflet the group published was the text of a sermon by the Bishop August von Galen which Hans Scholl had read in 1941 and which Sophie Scholl had acquired permission to use. The Bishop wrote scathingly of the Nazis, especially for their practices of euthanasia for the sake of eugenics and the belief that they were improving the German race. White Rose published their first piece in the summer of 1942. Over the next year, they published four more leaflets, leaving them in public phone booths, mailing them to academic colleagues and sending them to other universities across the country.

Several group members served on the Eastern front. Graf had seen the Jewish Ghettos set up by the Nazis in Poland. Schmorell, who spoke fluent Russian, was able to hear stories from Russians and other Slavs of war crimes and the inhumane violence of the German Army and Waffen SS. All these experiences added to the moral conviction of the Group and explains the fiery rhetoric of their leaflets. 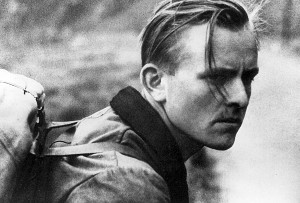 In January 1943, White Rose printed between 6,000 and 9,000 copies of their fifth leaflet. On February 18th of that year, Hans and Sophie placed stacks of this literature around their university just before classes  ended. As Sophie pushed a stack off of a top banister into the open Atrium below, she was spotted by a janitor. She and Hans were reported and arrested by the Gestapo. A quick investigation into items on their person and in their home lead to the arrests of most of the other members.

In a time in Germany where free speech was not a right, when dissent was forbidden, when Total War was the only acceptable mindset, these young students and activists knew what they faced.

On February 22nd, 1943, the Scholls and Probst stood trial in the Volksgericht, in a “people’s court” for political offenses. It was a show trial to make an example of them.

They were quickly found guilty and, the very same day, all three were beheaded by guillotine. They were committed idealists and true believers until their last.

How can we expect righteousness to prevail when there is hardly anyone willing to give himself up individually to a righteous cause. Such a fine, sunny day, and I have to go, but what does my death matter, if through us, thousands of people are awakened and stirred to action?

Schmorell and Professor Huber were beheaded on July 13th, 1943. Leipelt suffered the same fate on January 29th, 1945 after being caught distributing the group’s sixth leaflet in Hamburg. Huber’s wife was sent a bill for 600 marks. The charge was for “wear of the guillotine.” 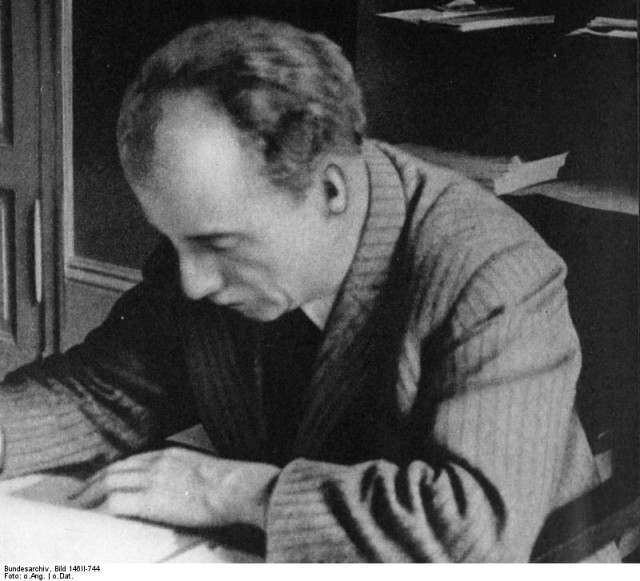 The sixth leaflet Leipelt had been distributing had been smuggled out of Germany after the trials and into the hands of the Allied forces. They proceeded to airdrop millions of copies over Germany as an anti-Nazi propaganda campaign preceding their invasion. The Group recognized the  inevitability of a German defeat who saw the increasing power of the Soviet Union, Britain and America and the limits of Germany’s war machine.

Through plays, operas, books, films, and the hearts and minds of the German people, the legacy of White Rose lives on as a great inspiration. For example, Hans and Sophie Scholl were voted some of the greatest Germans to have ever lived.

The 2005 film Sophie School: Die Letzten Tage(the final days), based on witness interviews and official transcripts, is a compelling  look at the investigation and trials. It is currently on Youtube.