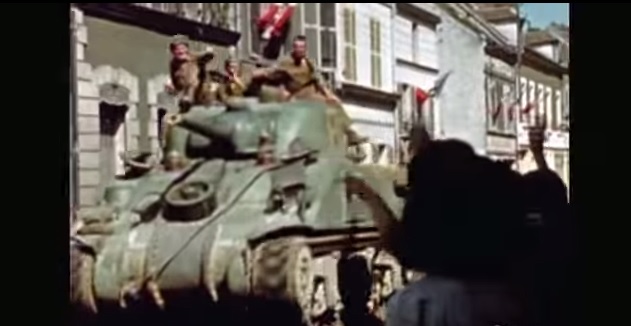 When the warship HMS Belfast fired the shot that launched the D-Day landings, it was carrying an unlikely passenger – Hollywood film director George Stevens. With Allied forces set to storm the Normandy beaches of Nazi-occupied France, Stevens was on-board making a unique 16 millimetre colour film journal.

He had made his name in the 1930s, directing the likes of Fred Astaire and Ginger Rogers in ‘Swing Time’ (1936) and Cary Grant in ‘Gunga Din’ (1939).  But in 1942, after seeing Leni Riefenstahl’s Nazi propaganda movies, Stevens enlisted.  General Dwight Eisenhower assigned him to head up the combat motion-picture coverage, a unit covering the war in black-and-white 35 millimetre film for newsreels and military archives.

But while documenting the Allied forces’ advance towards Berlin, he took with him a 16 millimetre camera and boxes of Kodachrome film on which he would shoot a personal visual diary of the war.
The film canisters of the war were developed back in the US, but Stevens stored them and for decades they went untouched.

That changed when his son, George Stevens Jr, also a filmmaker, decided to make a documentary on his father’s life and was amazed to discover what he found. An emotional Stevens remembers the first time he watched the films, astonished to see his young father heading to France on HMS Belfast.

“This film came on and it was sort of grey-blue skies and barrage balloons, those big things that hung in the sky, and it was on a ship. It turned out (to be) the HMS Belfast, and it was suddenly I realised the morning of the 6th of June, the beginning of the greatest seaborne invasion in history,” he said in a recent interview.

“I had this feeling that my eyes were the first eyes that hadn’t been there who were seeing this day in colour, and I watched this film unfold and on this ship – and all of these men with their flak jackets and anticipation of this day – and around a corner on the ship comes this man – helmet and jacket – and walks into a close-up, and it’s my 37-year-old father. It was so moving.”
George Stevens died in 1975.

At some point after his death, his son took the best of his father’s colour film and in 1994 produced a documentary entitled “George Stevens: D-Day to Berlin”.  The colour journal starts on D-Day – 6 June 1944 – and follows the filmmaker and his unit across Europe depicting in remarkable colour the devastation of French towns, the liberation of Paris, Generals De Gaulle, Patton and Montgomery in colour, German prisoners of war, and ghastly images from the Dachau concentration camp.

The film is narrated by Stevens Jr and contains interviews with members of his father’s team at the time, known as the “Stevens’ Irregulars”. For Stevens, his father’s collection remains the main historical record of the World War ll in colour film.  “We thought at the time that this was the only colour film of the war in Europe. As it turned out, there was some German film that had not yet been discovered,” he said.

“But it is the greatest body of colour film, and World War II was a black-and-white war. That’s how we see it. That’s how we saw it. And suddenly to see it in colour, it just took on a whole other dimension.”