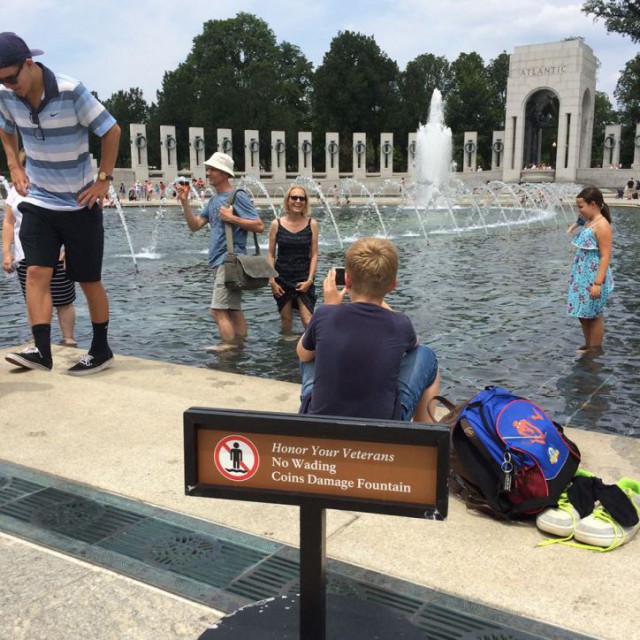 When visitors attend Washington, D.C.’s National World War Two Monument they expect to be able to have a moment of quiet to pay their respects to all of those who sacrificed their lives. However today the monument’s true meaning and significance is often overlooked by visitors.

The National World War Two Memorial is in central Washington just off Independence Avenue. Its neighbours are the Lincoln Memorial and the Washington Monument. The Memorial was built to honour over 16 million Americans who took part in World War Two, including the 400,000 who gave the ultimate sacrifice and lost their lives.

Sadly today, some visitors seem to forget its meaning. Particularly in the summer months, the memorial’s surrounding fountains and water pool become a playground for children and adults looking for cool respite.

One recent visitor said that they saw more than 100 people playing in the fountain and pools. Many were using it as an opportunity to take photos of themselves and treating it like a day at the beach rather than a moment for reflection, the Bangor Daily News reports.

The pool is surrounded by signs put in place by local authorities that state ‘No wading’, in memory of the veterans. It is also accompanied by a drawing of a person standing in the water with a line through it, so that even foreign visitors who don’t speak English are able to understand. Nevertheless it seems that most visitors decide to ignore the signs.

Some of the photos have been posted online and on social media and are getting a mixed reaction. Some are disgusted by the visitors’ actions, whilst others can’t see the problem.