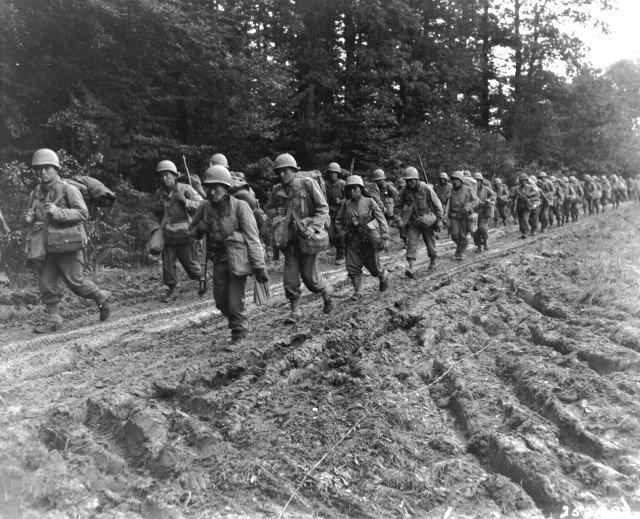 Richard Arthur Thomas is a gentle, humble 97-year-old who hides a heroic nature behind his unassuming façade. He was awarded the Distinguished Service Cross, as his citation reads,

“For extraordinary heroism in connection with military operations against an armed enemy while serving with the 422nd Infantry Regiment, 106th Infantry Division, in action against enemy forces from 16 to 21 December 1944, in Belgium.”

The tale that this humble man can tell would make a spectacular blockbuster movie and certainly reads like a Clive Cussler novel. Not only was Richard Thomas, an intuitive leader of men, he was extremely brave, and also protected by a vigilant guardian angel!

Richard Thomas joined the army in 1940, completing his basic training at Fort Ord in California. He then moved on to the Aberdeen Proving Ground for ordinance school. When Pearl Harbor was attacked in December 1941, he was stationed in Anchorage, Alaska, later transferring to Nome on the western coast.

In 1943, he was sent for cadet pilot training at the University of Tennessee, but with the oversupply of pilots, he was reassigned as a sergeant in the motor pool and posted to the European Theatre of War. Traveling by sea, he arrived in Liverpool in December 1944 and was sent to Belgium where he was stationed with his regiment, the 422nd Infantry, part of the 106th Infantry Division, at the town of Auw. On the so-called Siegfried Line, the town of Auw was just inside the Belgium-German border.

On the morning of December 16, 1944, Thomas was ordered on patrol; shortly after he left, the Germans attacked Auw. The Germans, knowing that church steeples were used as lookout points, blasted away at a church, and Thomas knew that there were 50 members of the 81st Engineer Combat Battalion inside the church. He watched in horror as the German tanks blasted shells into the church, but was relieved to see the men inside escape and flee over a 40-foot cliff where they were hidden from the German tanks.

Thomas knew that he had to help his comrades, but there was a minefield between him and them. Undaunted, he set out across the minefield, telling his patrol to step in his footsteps as they gingerly made their way across the field. His guardian angel stood firm and they made it safely across to find the men from the 81st in a bad way.

They were shell-shocked, and many were wounded and trying to surrender by waving a long branch with a T-shirt tied to the end.   Still to this day the memory caused Thomas’s voice to break. “They were really hurting,” he told an interviewer for the Desert Sun.

Showing intuitive leadership skills and handling these tormented men with care and compassion, Thomas moved them into the forest away from the German guns. He watched as the German tanks systematically blew up every building, looking to destroy the men that they believed were hidden there, and starting at a point where they were able to strand Thomas and his fellow soldiers from any assistance that might have come their way.

The company of which Thomas was a member, H Company, lost about half of their 200-strong complement in the initial attack. Though the Germans employed a three-pronged maneuver, Thomas managed to work his way around the enemy and get his little patrol, with their wounded and shocked comrades, to safety.

He continued to lead his band towards safety, and soon he came upon a clearing in the forest where he saw American forces below him on the side of the hill. They had only just started moving down towards the American forces when Thomas saw the leaves of the bushes in front of him being moved, and he realized that the Americans were firing at him.

Not wanting to be the casualty of friendly fire, he started yelling at his fellow Americans; eventually, they realized that they were in the process of killing off their own side. Thomas led his band down the hillside; he left the men of the 81st that he had rescued with their comrades, and he and his patrol left to find their own company.

When he finally found his company, he was astounded to discover that only 96 men remained and only one officer, second lieutenant Walker, who would now assume command. All the rest of his company were either dead, seriously wounded, or captured. Walker and another Second Lieutenant were busy organizing the remnants of their company with other stragglers from other companies.

It is obvious that this action that they had just lived though made a very deep impression, and Thomas told The Desert Sun, “It was just a few hours after the initial attack that we joined our company and the men were all still quite visibly distraught and showed the strain of horror that they had gone through; the carnage was prevalent in all directions. We were deeply saddened to learn of our heavy losses, but we were pleased to hear of the many brave deeds that had been performed … this was a very sad and depressing day for all of us.”

Thomas and his comrades were now in a very desperate situation. They had been completely overrun and were stranded behind the lines with little food and no weapons to take on the German tanks that they could hear around them. They believed that their only hope was that the heavy cloud cover would lift, allowing the Air Force to come to their aid.

The following day Thomas was told that the unit was almost out of food and that eleven men had volunteered to undertake ranger duty to try to find and capture a food cache that they believed to be in some buildings close by. All the officers and other non-commissioned officers had refused to lead the ranging mission; Thomas was the last one asked to lead the men.

Once again Thomas’s leadership skills came to light, and he accepted without a quibble – all he needed was his rifle, and he would go. Thomas may not have had all the training that this type of mission required, but that made no difference – he could shoot, and he could walk, so he needed nothing more.

Thomas stood tall and led his band through three hedgerows, and as they neared the top of a slope, they saw the buildings that they were looking for. The buildings were about a half a mile away across a piece of open ground, but at that distance, they could not see if the buildings housed the enemy or not.

Thomas knew that these buildings were their target, and they needed to find a road that led to the target so, telling his men to remain hidden; Thomas climbed up to see if he could locate a road and try to determine if the road was passable. Getting to the top of the slope, he saw that there was a road, but it was cut into the side of a steep, narrow valley that went almost straight down for 200 feet.

The road had no tire tracks on it, and it had been shelled and part of the road was broken. Thomas thought that the road was probably too dangerous to use but, having no choice in the matter, he decided that they would use it anyway. The other side of the valley was some 20 feet higher than the side Thomas was on and he could see no sign of the enemy, so he stood up to determine if he could see anything moving on the other side.

Standing to survey the other side, Thomas heard a ‘swoosh’ coming from his right and the next thing he knew he was lying on his face about ten feet down the side of the valley. He had been hit on the head by a shell that had misfired, and his helmet had taken the full brunt of the fall. He was disoriented and, though uninjured, he couldn’t gather his wits, and he couldn’t find his rifle.

He again stood up to see if he could find the enemy position and, as he had been fired upon he knew where to look, he found their position, looking straight down the road at the buildings. He was thankful that he knew where the enemy position was; he went back to his squad and was very pleased to see that they had recovered his rifle. Now knowing what he faced, he led his men down the valley, carefully walking below the level of the road where they could not be seen.

They arrived at the buildings and found them deserted, but there was a huge cache of food. They needed a vehicle to transport the food back to their company and they found a six-wheel dive, two and a half ton truck that would suit their purposes perfectly as it had a flat bed with rails.   The only problem was that the truck was at the bottom of a huge shell hole – one made by a 50-pound bomb.

The Germans had abandoned the truck, thinking that they could not get it out of the hole, but they had not counted on the never-say-die attitude of Thomas and his men. One of them jumped into the truck and, gunning the engine, he drove the truck out of the hole after a few tries.

Thomas told the driver to fill the tank of the truck by siphoning off fuel from the vehicles lying around. He was not prepared to trust a fuel gauge – he wanted to see the fuel lapping at the top of the filler pipe!

Thomas then stood guard as his men loaded all the food that they could. When they had packed the truck right up to the top of the rails they still had more food in the cache, so they linked a ten-foot trailer to the truck and proceeded to pack the remainder of the cache onto that. As they finished loading, the two men left guarding the road ran up shouting that he Germans were coming.

It seemed like hours before they finally reached a position opposite where Thomas had seen the enemy post; once again his guardian angel came, though, as there was no response from the German position. As they turned toward where their own company was waiting, Thomas started to breath normally. “I thanked God, again, for his blessings and profound miracles. Life is so precious; may I always appreciate it as much as I did that moment.”

Thomas and his tiny band of volunteers had captured two and a half tons of food, which meant that his company could continue to take the fight to the Germans. He was overwhelmed with the response that he got from the other men in his company when they found out what he had his little band had accomplished.

The trust that his men had in him and his abilities was evident when one man jumped off the truck saying, “If Sgt. Thomas would attack hell; I would follow him.” Thomas felt that the remark was ‘touching and generous’ but it was neither – it was a heartfelt comment made to a man who led from the front and was a laudable example to the men reporting to him.