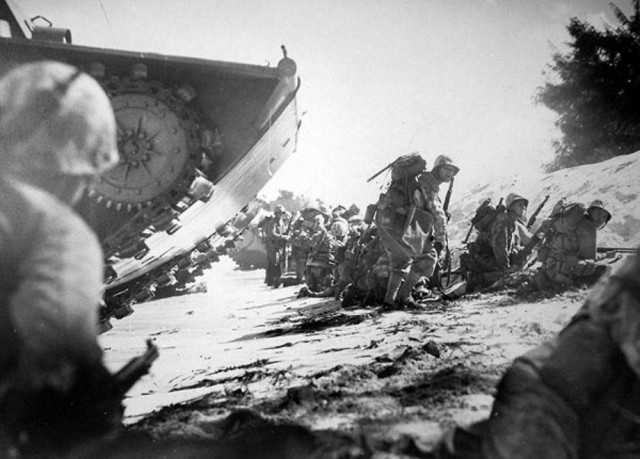 The Second World War battle of Saipan took place between 15 June–9 July 1944. The battle has been described as one of the most important strategic moments during the war in the Pacific. With an area of 25 square miles, Saipan is the largest of the North Mariana islands in the Western Pacific Ocean, and at the time of the battle it was occupied by some 30,000 troops of the 43rd Division of the Imperial Japanese Army. There was also a civilian population of around 29,000 people.

Located some 1200 miles from the Japanese coast, Saipan was a strategically important island from an American point of view. The advent of the new B-29 ‘Super-fortress’ long-range bomber meant that a base on Saipan would put American aircraft within operational reach of Japan.

Following a heavy naval bombardment, the first wave of 8000 US Marines landed on the beaches at 5:30 on the morning of 15th June. They encountered fierce opposition, and by the end of the day 2000 Marines lay dead.

Heavy reinforcements were landed during the next day, and slowly the Americans gained ground, spreading out across the island until by the end of July the remaining Japanese troops were trapped in the North. Realising he could no longer hold out against superior numbers, the Japanese commanding officer committed suicide, but not before issuing a final order to his men. He commanded them to make one last suicide attack – called the ‘Banzai attack’ – and 4000 yelling soldiers swarmed towards the American position near Tanapag Harbour.  Almost all the Japanese died in the attempt, and on 9th July the American flag was raised in victory.

The hard-fought battle resulted in the deaths of over 3000 US troops, with another 13,000 wounded. It is estimated that Japanese losses amounted to 27,000 men. As news of the American victory spread amongst the civilian population, over 1000 people obeyed a call from the Japanese Emperor and jumped to their deaths from the coastal cliffs, the US News reports.

Seventy years on, a privately organised Japanese excavation has discovered the remains of U.S. Army 27th Infantry Division men together with those of Japanese soldiers posted as missing after the Banzai attack. The group, consisting of both American and Japanese volunteers is planning further excavations.

The Pentagon department responsible for recovering the remains of US soldiers from foreign battle sites is not directly involved, but in an email to the organisers a spokesperson acknowledged that it was “……. eternally grateful for this assistance and support,”