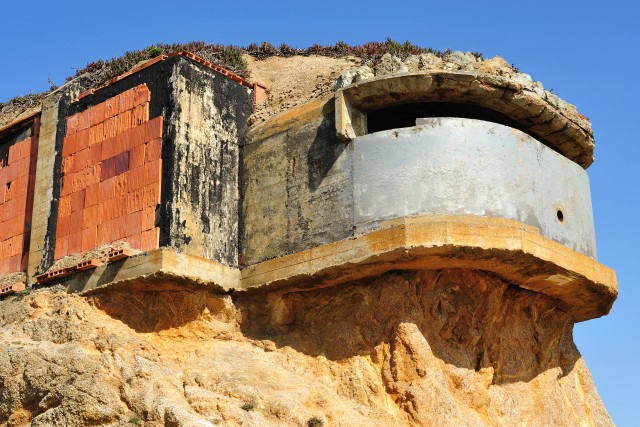 Sitting precariously atop Devil’s Peak, just off Highway 1 in Mateo County, in the San Francisco Bay area, Little Devil’s side bunker is a lonely reminder of the preparations made to defend the Port of San Francisco against a Japanese invasion.

San Francisco’s port was once considered to be second only to that of New York in importance, and the bay area has been the scene of severaml eras of fortification. It all started in the late 1700s when five cannons were installed at La Batteria San Jose.  Then, almost a century later, emplacements for 126 guns were constructed at Fort Point. In all, there have been seven separate periods of defence construction, dating from before the US Civil War to the nuclear missile sites of the Cold War period.

The very nature of the construction methods needed for heavy artillery emplacements and associated fortifications means that these sites are built to endure, and endure they have.

By summer of 1940, Battery Townsley was ready for testing with live ammunition. The army estimated that the projectile’s farthest range would be 30 miles out to sea, about 5 miles beyond than the Farallon Islands. Waiting for a non-foggy day in July took some patience, but finally, the fog cleared and the test shot was fired.

As the whole mountain shook with the power of this incredible machine, the projectile went even farther than anticipated. Battery Townsley, together with Battery Davis at Fort Funston on the Pacific shore south of the Golden Gate, became the prototypes for the army’s future coastal defenses; the army planned to construct at least 25 additional 16-inch gun batteries along both the nation’s eastern and western seaboards.

Devil’s Slide was the location of a military triangulation station and observation site used during World War II as part of the harbor defense of San Francisco. Prior to the advent of radar, military personnel would use binoculars and compasses to search for ships at sea and relay their coordinates to a central post.

The pill-boxes were used as hardened observation posts, and one of the bunkers was used as a communications and command post.

Leaving nothing to chance, the San Mateo County Civilian Defence Council trained thousands of volunteers to act as air raid wardens and firefighters who could extinguish the fires started by incendiaries, should an aerial attack take place.

None of the anticipated invasions materialised, but if they had the bay area would have been ready.

Just 2 years after the war, all guns remaining in the seacoast defenses of San Francisco were declared surplus, and the last weapons were removed in 1950. The Coast Artillery was deactivated that same year.

Perched on its rocky outcrop, dilapidated and sprayed with Graffiti, Devil’s Slide bunker stands today like a sentinel –  a lonely reminder of days past when America’s Pacific coast was often vulnerable to invasion from across the seas.

“Bunker at devils slide california” by Lawrence Lansing – Own work: http://picasaweb.google.com/fuzzynerd/. Licensed under CC BY 3.0 via Commons.