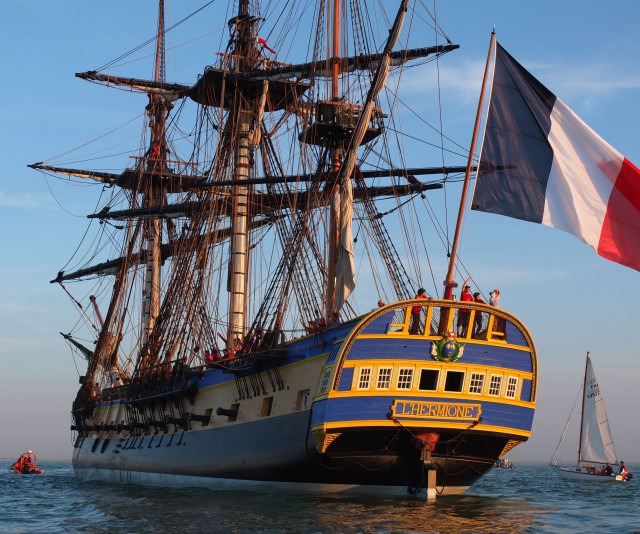 The people of France decided to make a replica of an old 18th Century Revolutionary War ship. The name of the ship is Hermione, and it has recently set sail from France, heading towards Boston.  The ship had been in the works since 1997 at a cost of 27 million dollars to complete.

Before the Hermione set sail, she was given an official send-off by the president. The French president made a speech before the launch in which he stated that Hermione’s first voyage was be to Boston because the ship represents the friendship between France and the United States. He gave credit to the craftsmen who worked as blacksmiths, sail makers, wood-carvers, carpenters, and more.  As their trades slowly die out due to the proliferation of industrial machines, there has been less need for their crafts. However, they have been granted the gift of working on the large ship.

What is significant about the Hermione is that she carried 19-year-old Marquis de Lafayette of France across the same route the replica is going.  He traveled across the world to help the American colonists with their war of independence.  The ship is a significant symbol of the bond between France and America.

Nearly a century later, there was a ceremony that sealed the two countries’ friendships.  The event was that of the inauguration of the Statue of Liberty in 1886 at New York’s harbor.  Lady Liberty represented a gift from the French to commemorate the declaration of America’s independence.

After Boston, Hermione made her way to Virginia, where Lafayette originally played a critical part in the battle against the British.  Lafayette served in George Washington’s army. Nearly 235 years ago, the original Hermione made it back to France to get men and ships to help in the war. Along with Lafayette, the Hermione also helped as a blockade during the Battle of the Capes, a major battle that led to the British troops’ surrender.

It is no wonder that building the replica took so long. The ship is 200 feet long and has 16,000 feet of sail.  It was built with mostly the same materials as the original ship.  It took money and donations from both sides of the Atlantic to fund the project, and 3,000 oak trees to build the ship.  It took 17 years for it to become a reality.

The replica has a crew of 80 people, mostly made up of French volunteers.  However, there are a few Americans who also volunteered to sail.  One of the crew members said it’s not only about the adventure, but it is also about the bonding experience they have with each other.  Being on a ship for months with nowhere else to go is amazing.

There are even women on the voyage, which was unheard of in the times of the original ship.  One of the women is second in command on the ship.

The project is not just about history, but it is also about engaging young people and old alike in the spectacular stories of Lafayette and Hermione.

The ship wasn’t in America long – the crew planned on staying about a month, traveling the coast between Virginia and Maine.