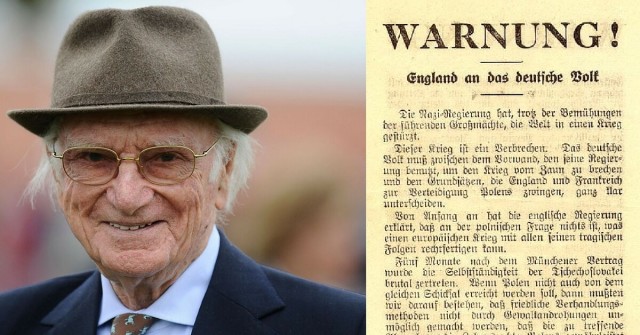 Right, example of a propaganda leaflet dropped by the RAF

A collection of newspapers, paintings, and other documents scheduled for its first public display shows just how varied Sir Peter O’Sullevan’s life was. From his love of dogs to his success as a pundit on the racetrack, O’Sullevan was clearly more than just a famed sports broadcaster. One of the most unexpected parts of his life was his time spent as an anti-Nazi agitator planning a workers rebellion against Adolf Hitler.

O’Sullevan attempted to bring hundreds of anti-Nazi and pro-British leaflets into Germany by stowing them away in a secret compartment built into his red Morris coupe. These leaflets, intended to be secretly distributed, encouraged German workers not to resist British soldiers. The brave young man, only 21 at the time, sought to carry out his plan despite advice from the Labour Party. Travel restrictions between the United Kingdom and Germany, however, precluded his attempts to greatly affect the British war effort.

Sean Magee, O’Sullevan’s friend and the man he entrusted with his personal archive prior to his death last year, commented, “The plan was really the mark of a very idealistic young man.” The very idea of distributing anti-Nazi leaflets demonstrated that O’Sullevan had a very active political conscience during a tumultuous and turbulent time period. Despite the fact that O’Sullevan became a very well-established figure years later (and even associated with the royal family), he never lost touch with his beliefs and ethics.

Several of O’Sullevan’s keepsakes, including the leaflets and artwork from North Africa, are due to be displayed at a London art gallery before then being donated to the Cox Library of racing books. The historic documents are accompanied by a more personal letter to O’Sullevan from Chef Albery Roux. This letter references O’Sullevan’s beloved miniature poodle, Topolina, as “a welcome visitor of Le Gavroche and all other Roux enterprises where she is renowned for her impeccable conduct”. Further, O’Sullevan’s old betting vouchers will be displayed as an acknowledgement of his prowess, or luck, in the English horse betting circuit. After remarkable success, winning consistently for three years, the William Wood Turf Accountants informed O’Sullevan they simply could not afford to keep him as a client. They kindly wished him their best, but declared that he must bet elsewhere as he was “too good for us!”

O’Sullevan’s ability on the billets was matched only by his aptitude for commentating. He had the ability to calmly instill ‘a bit of drama’ in every race he oversaw. This was no doubt due to a passion for the sport, demonstrated by his maintenance of 51 separate scrapbooks and still more commentary cards detailing his written work over his long and illustrious career as a racing journalist. From Nijinsky’s 1970 Derby victory to Red Rum’s historic second Grand National Victory, O’Sullevan’s love for the sport is present in every piece of his writing.

O’Sullevan’s was famous and he even made an appearance on the hugely popular Morecambe and Wise Show, the transcript of which will be included in the exhibition. This transcript will be accompanied by Sir Andrew Lloyd Webber’s unique musical greeting designed specifically for O’Sullevan’s retirement.

Magee spoke to his longtime friend’s desire to chronicle his life through collecting keepsake papers, documents, and objects. The in-depth collection depicts how this man preserved every detail of his life dating back to his earliest days of childhood. You don’t find a self-archivist every day.

The exhibition, to be held at the Osborne Studio Gallery in Knightsbridge, England, from March 9 until April 1, is a testament to both O’Sullevan’s life and to the abilities of his maternal grandparents, Sir John and Lady Henry, to raise such an impressive figure of a man.