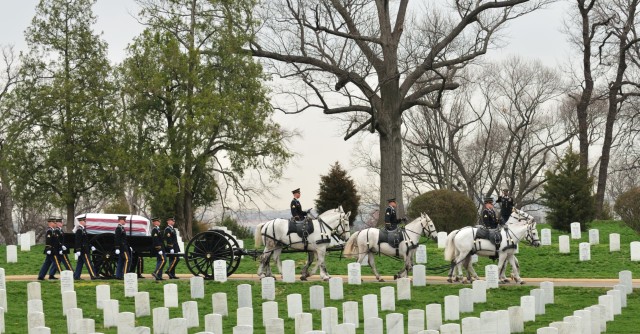 Willis Carto, an 89-year-old wounded U.S. veteran of World War II passed away in October 2015. While fighting as a soldier in the Philippines, Carto was wounded and eventually received a Purple Heart for his service. He was buried in the presence of his friends and family at the famous Arlington National Cemetery in Virginia. Mr. Carto is, however, remembered by many for his pro-Nazi sentiments coupled with his contentious belief that the Holocaust was a hoax.

The veterans who receive this prestigious award, and their family members, are eligible to be buried in the Arlington cemetery. An exception would be made for those who later received a dishonorable discharge or a state or federal conviction of some kind.

Jennifer Lynch is a spokesperson for the cemetery, who was asked about the burial of Carto despite his controversial views. She explained that a person’s political views did not impact the eligibility requirements.

So Carto received a military funeral, despite going on to state in a very public way, extremely controversial and offensive ideologies after his military career. He was not shy about his white supremacist mentalities, his anti-Jewish sentiments, or his genuine belief the Holocaust was a fabrication.

Taking it one step further, Carto even admitted that during the war he had fought on the wrong side. He declared his thoughts in a 1966 letter when he wrote, “the defeat of Hitler was the defeat of Europe and of America.”

His life after the military was filled with various causes intended to perpetuate his beliefs. Liberty Lobby was a white supremacist organization, and the Institute for Historical Review was a Holocaust denier group; both were groups founded by Mr. Carto himself. He had a sense of belonging and enjoyed the influence he had among white America’s who were intolerant of other races. It was not difficult to find people to rally around causes that were anti-Semitic or even racist.

The New York Times published an obituary for Carto highlighting the Liberty Lobby’s peak popularity in the 1980s when it had over 400,000 newsletter subscribers. This was a man that the FBI spied on from 2000 to 2002. Todd Blodgett, advertising manager for Liberty Lobby, was their informant. Mr. Blodgett explained that Mr. Carto hoped to be buried in the Arlington National Cemetery because he thrived on the irony of being a pro-Nazi American war hero.

Carto recognized the irony and simply laughed about it. He declared himself likely the biggest Hitler fan in America, but he would still be buried next to all the other veterans. Only about two dozen people gathered to remember this man at the cemetery’s administrative building before getting in their cars to bury him in the cemetery grounds.

One mourner expressed positive feelings about Carto, calling him a hero who should be remembered for his fight against oppression. Another mourner simply called him a great man whom he had known personally. He thought Carto had fought hard for the best interests of our country and special interests alike. He confirmed that Jewish people were who he was referring to as special interests. This mourner dismissed the offense that people might take to Carto’s views and instead eluded to a “counterrevolution” being far more worrisome. Afterwards, Joel drove away in his red pick-up truck adorned with bumper stickers supporting groups on the political far-right.

While only white people gathered for Carto’s services, there was another, much larger, service taking place one floor up in the administrative building – the memorial of a Dorothy Goldstein, the recently deceased wife of a retired army officer. Naturally (or ironically) this couple was in fact Jewish.

Not surprisingly, a career army officer who had been a classmate of Goldstein at West Point expressed disappointment. It did not make sense for a Nazi advocate to be buried on the same grounds as his close friend. But this mourner did not argue against Carto’s right to be buried in the cemetery. What people do after they leave the military is their business, and apparently this man maintained his rights. Sometimes what is technically and legally right can still seem so wrong.

The Anti-Defamation League, a national anti-Semitism watchdog, articulated similar sentiments. While it is unfortunate to have a man with such views be buried in the national cemetery, the criteria to qualify is what it is. Not everyone was this understanding about it. Rabbi Marvin Hier, founder of the Simon Wiesenthal Center, a Holocaust research and awareness organization, was very disturbed by this decision. He called it a “national disgrace.”

It makes no sense to the rabbi that the country could honor a man who openly supported one of the most terrible events in the history of the world. It seems utterly disrespectful to bury him alongside the very men who fought valiantly to defeat Hitler and all that he stood for. Had the war ended with a different outcome, Carto would have been a viable candidate for a high position in Hitler’s government. This is a special cemetery that serves as a symbol of what the U.S. has fought for. It seems wrong to honor a man here who stood, fought, and advocated the opposite, almost all his life.