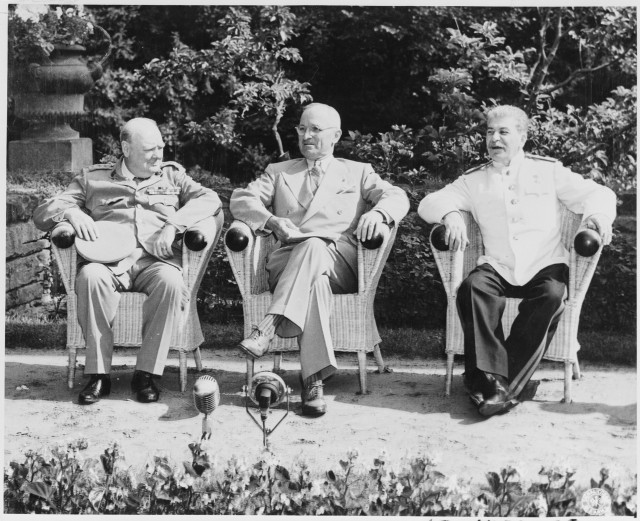 Churchill, Truman and Stalin [Via]

It was in July 1945 that British Prime Minister Winston Churchill, US President Harry Truman and Soviet leader Joseph Stalin came together at the Potsdam Conference to discuss the future of Europe.

Even though the fight against the Japanese continued in the Pacific, the three leaders wanted to rid the European region of the Nazi regime once and for all.

President Truman was relatively new to the war effort, and had only taken power since President Roosevelt had died in April of the same year.

Meanwhile the leaders had agreed at the earlier Yalta conference that they would allow democratic elections in the Nazi-occupied countries, but this was looking like a distant memory as the reality of splitting Europe between East and West took hold.

US intelligence was advising Truman that while face to face Stalin would agree with democratic principles for Europe, he was secretly working with his own Soviet intelligence services to ensure that support for democracy and backing for communism was established in the countries that required rebuilding.

Where Soviet troops were taking control in Eastern European countries, Churchill showed his disagreement and protested about what was happening in those countries. When it came to discussing Germany a huge debate took place. While the Allies wanted the German people to recover and be reincorporated into Europe, Stalin wanted to break-up the country so that it could never re-establish the military capacity of the Nazis, The Daily Beast reports.

Stalin became ever more suspicious of the Allied leaders, but eventually some agreements were made. The agreed in principle that Germany should remain a whole state, but they did not agree at Potsdam how the country should be governed and so temporarily ordered that the country would remain split into Soviet, British, American and French occupational zones.