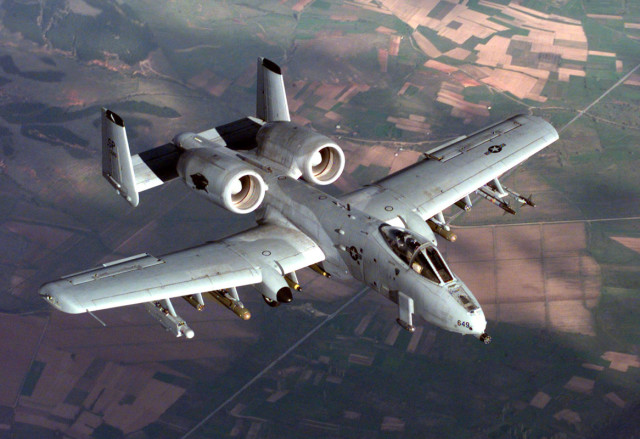 After several years of back and forth speculation and debate over the fate of the highly effective fighter jet, the A-10 Warthog, the U.S. Air Force has announced a temporary reprieve. USAF wants to retire the fleet and replace it with a more costly alternative, the F-35A, but will do so at a slower rate than previously anticipated. However, advocates of the A-10 think that these jets should not be retired at all. They are simply too good at what they do!

The decision of the U.S. Air Force and the Pentagon seems strange to many, given the fighter jets’ efficiently executed air attacks on ISIS targets and success in acting as visible deterrents against Russian aggression in eastern European airspace.

The A-10 Warthog was introduced into service in the mid-1970s. The existing fleet currently consists of approximately 284 jets. Although this aircraft is not best known for its aesthetic qualities, it is unrivalled in its ability to deliver persistent close-target fire attacks without endangering friendly forces.

The U.S. Air Force’s current plan is for the A-10 to remain in action until approximately 2021, although it is thought that this will be a staggered process, where the process of  retiring the aircraft starting as early as next year.

The A-10 community is baffled as to why these relatively economic  jets need to be retired at all and believes that there are decades of life left in the Warthog yet. Despite this decision the jets still continue to be upgraded, using taxpayer money. New sensors and wings have been added and improvements to the cock-pits have been made.

It can be argued that the F-35A fighter jet, which is due to replace the A-10, is not a like for like replacement and will not be able to perform in the same effective way as the A-10 in specialist missions. Brigadier General Thomas Dale discusses how the A-10 is perfectly suited for the variable climate conditions of the Middle East in the book A-10 Thunderbolt II: Operation Enduring Freedom 2008–14 (Osprey Publishing, 2015):

“If you look at a map of Afghanistan, the south is dominated by flat open desert, while the east is filled with significant mountainous features. There are also weather patterns unique to these areas that challenge the ability of aircraft to provide direct support to our ground units. Nevertheless there was a requirement to operate under the weather in tight valleys in the east. Although other airframes were available to the Coalition in-theatre, and they could have performed such a mission, they weren’t optimal for it.”

The F-35A also costs in excess of a whopping $100 million per aircraft and runs on a higher per hour operation rate than the A-10.

Supporters of the A-10 Warthog will no doubt continue to apply pressure to USAF for them to reconsider the lifespan of this highly effective and valued aircraft for some time to come.