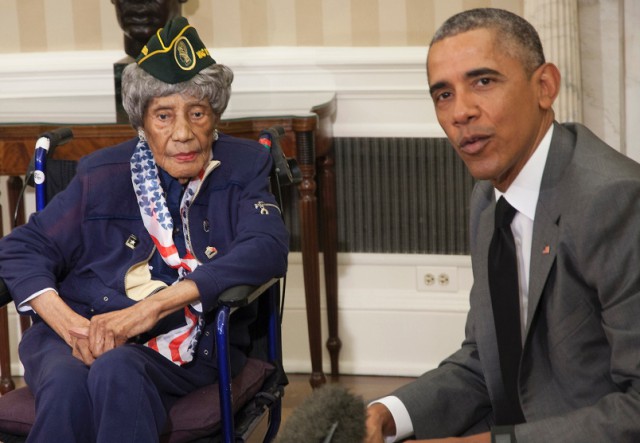 Emma Didlake has been hosted by US President Barack Obama at the White House in Washington to commemorate her service during World War Two, as she turns 110 years old.

Emma, from Detroit, Michigan, is thought to be the oldest US veteran still surviving from World War Two.

President Obama praised Emma for her service during the war and said that the American people were grateful for what she did. As an African American Obama said that she was also part of the people who helped to integrate the US Army troops.

Emma was one of 15 siblings born in America’s southern state of Alabama in 1905. Emma got married at the age of 17 and had five children of her own. After America joined the war, Emma also decided to sign up and join the army.

She went on to travel the world in service, and received several awards and medals for her actions including the Women’s Army Corps Service Medal, American Campaign Medal, and World War II Victory Medal. In an era when most women stayed at home looking after their children while the men went off to war, Emma was a real beacon and inspiration to American women, the ABC News reports.

Once the war had ended, Emma continued to campaign for African American rights and joined the National Association for the Advancement of Colored People, even marching with Martin Luther King.

Emma says that she’s lived to the old age of 110 because she eats lots of healthy foods, full of fruit and vegetables and not a lot of meat. She says she also likes a little vodka every day.

As part of an initiative to honour World War Two veterans, Emma will go on after her White House visit to attend the World War Two Memorial, the Fredrick D. Roosevelt  Memorial and the Martin Luther King Memorial.