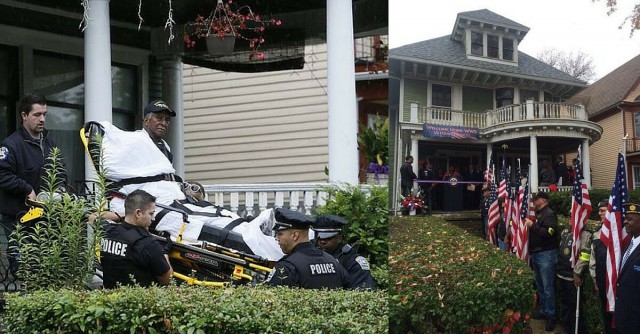 A 90-year old World War Two veteran has returned to his life-long home after being evicted earlier this summer. John Hodges had lived at his home for over 60 years at Humboldt Parkway in Buffalo, New York. However, he was issued with an eviction notice in July after his mortgage lender foreclosed on the property.

During the war, John served on a US Navy transport ship and sailed in the Atlantic and Pacific.

Even though John has lived in the house for so many years, he took out a remortgage on the property in the 1990s and had since made $100,000 of missed repayments. Over the years, John suffered financial difficulty and had to nurse his wife with Alzheimer’s ensuring that the repayments on his loan became unpayable.

John had taken redundancy from his last full-time job at steel works and went on to work part-time as a school bus driver. By the age of 85, he was no longer able to work.

The authorities who evicted him removed him to a local Veterans Affairs hospital where underwent a health evaluation. Upon being released from the veterans’ hospital, John was found housing at a senior citizen’s apartment nearby.

As word spread of John’s plight, a fundraising campaign was set up to help raise enough funds to keep Johnnie in his home.

The fundraiser, set up at ‘GoFundMe’, was set up by a Elwood, 41, a stranger who felt an emotional connection to the story and it ended up raising around $100,000 for Johnnie.

“Our original goal was $50,000, that was the amount that Robin needed to purchase the home back,” Elwood told ABC News. “It’s just a wonderful feeling to know that he’ll be back in that home to be able to celebrate the holidays with the family. He has a lot of memories in that home. It’s very clear he was close with his late wife Flora and I just feel good knowing that he’s at peace.”

Now John has been able to move back into his home and was greeted by family, local officials, friends and neighbours to welcome him home. Johnnie thanked everyone and thanked the fundraisers for their help. He also thanked God for his help.