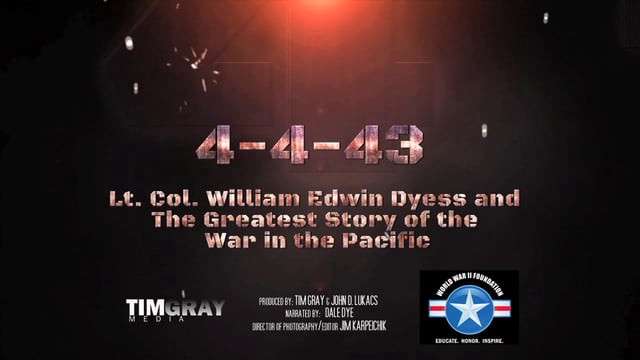 A film director has made a new World War Two documentary telling the story of a little-known prisoner of war camp escape attempt from Davao Penal Colony.

John D. Lucas believes that the escape attempt by 76 Allied prisoners from the Stalag Luft III prisoner of war camp in Germany and retold by the famous movie, ‘The Great Escape’, was not in fact the greatest escape attempt of the war.

John believes that a lesser known escape which occurred when 12 Allied prisoners walked out of a Japanese prisoner of war labour camp and survived the surrounding jungles of the Philippines is a far greater story.

John has already written a book about the escape attempt called ‘Escape From Davao: The Forgotten Story of the Most Daring Prison Break of the Pacific War’, and is now screening his new documentary based on the same story. The documentary is titled, ‘4-4-43’, which is the date that Lieutenant Colonel William Edwin Dyess, along with nine other American prisoners and two Filipinos escaped from the Japanese Davao Penal Colony in the Philippines.

William had been born in Texas and had taken part in many operations throughout the Pacific theatre of the war. He had originally joined the war effort as a fighter pilot in the US Air Force. He then went on to lead the first sea to ground assault on the Philippines against the Japanese occupiers.

By the time of the escape attempt he had already survived the Bataan Death March and so thought nothing of leading the escape plans from the prison camp.

John’s own father had served in the US Air Force and so has always been interested in World War history, which led him to become a history teacher, The Santa Fe New Mexican reports.

It was after meeting a footballer, Mario Tonelli, when he found out about the Davao prisoner of war camp and the terrible conditions there. It was Mario who encouraged John to research about the camp further and to look into the people who lived, died and survived in the camp.

The camp was populated with thousands of Allied troops after they had to surrender the battle at Bataan in 1942.

John says that the escape attempt emerged because of the terrible conditions and treatment that the prisoners experienced including starvation and torture.

You can watch the full film, pay on demand here: