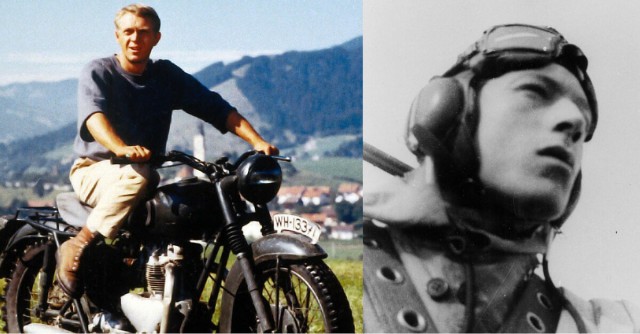 The World War Two veteran who was played by Steve McQueen in Hollywood movie, The Great Escape, is the subject of a new biography.

William Ash was American, but as the US hesitated to get involved in the early days of the World War Two he left for Canada where he joined the Royal Canadian Air Force and trained as a pilot.

As soon as his training was finished he was deployed to Britain were he joined the Royal Air Force’s 411 Squadron to fly Spitfires.

Early on in 1942, William was on a mission over enemy territory in German-occupied France. His plane was shot down and he survived the crash escaping to nearby French locals who kept him sheltered and hidden from German troops.

However, as William made his way north in an effort to get back to the UK, he was caught by the German intelligence arm, the Gestapo, in Paris. They sentenced him to death, but the German Luftwaffe argued with the Gestapo saying that William was their prisoner since they shot his plane down. He was taken by the Luftwaffe and imprisoned as a prisoner of war (POW), spending the remainder of the war in prisoner of war camps.

Like many POWs during the war, William became obsessed with escaping and would constantly try with whatever means he could to escape imprisonment.

William survived the war and died just last year aged 96, with many people claiming him to have been the inspiration for Steve McQueen’s character in the movie. McQueen’s character tries to escape and makes it to the Swiss-German border on a motorbike, where he makes a failed attempt to jump over the borders barbed wire fences.

However, William did say that he didn’t take part in the mass escape attempt portrayed in the film because he was in fact locked up in solitary confinement, after being punished for an earlier escape attempt.

William held many similarities to McQueen’s character – he was handsome, American, dashing and definitely a little rebellious, the BBC News reports.

The new biography ‘The Cooler King’ has been written by Patrick Bishop and has been released this month.