The tall ship “Eagle” was originally built by the Nazis during World War Two, today the ship is used for training by the US Coast Guard.

A German veteran from WWII, living in America noticed the ship that he had actually served on moored in a Connecticut harbour and could not understand how the vessel had come to be moored in America. Tido Holtkamp had been a crewman on the Eagle during World War Two. Now at 89 years old, Tido said that he recognised her by the curves of her hull even though she has now been repainted in the US red, white and blue colours.

When Tido served on the ship she was known as the Horst Wessel.

In the Connecticut-based, Coast Guard Academy Museum nearby where the Eagle is moored, the original golden eagle figurehead is kept as a memento of where the Eagle came from.

In a usual day, the Eagle is now used by 150 cadets who learn to climb the rigging and set sail. It is the flagship of the US Coast Guard and in actual fact the only tall ship of its kind to be in service in the US military. 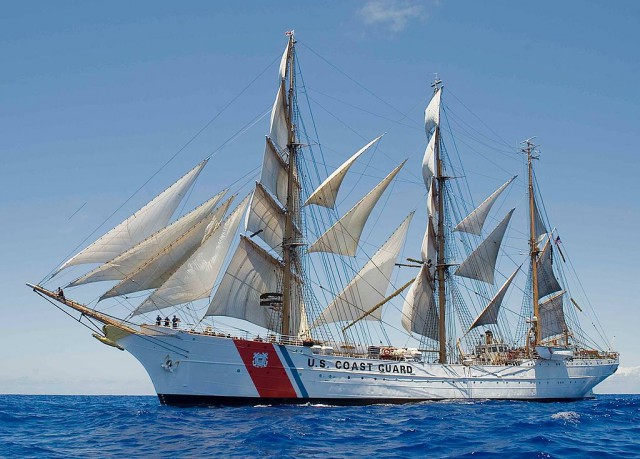 Ever since the end of World War Two, the ship has been used to train US Coast Guard cadets to become officers. The Eagle enables cadets to be trained the old way on a traditional tall ship.

Famously, even President John F. Kennedy visited the Eagle, along with President Truman and Nixon. The Coast Guard says that even though the ship is now old-fashioned it serves to help young cadets to learn many lessons about the sea, wind, currents and how to become an excellent seaman.

Tido says that the golden eagle once held a swastika and was built in the Hamburg shipyard of Blohm and Voss, who also built the Bismarck. She was built before the war began in 1936, as the Nazis were rapidly growing their navy. Similar to its use today, the Eagle was commissioned to train German sailors, the BBC News reports. 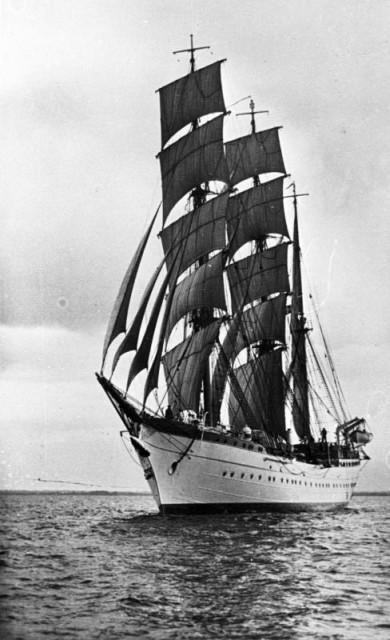 The Horst Wessel in 1936 via Bundesarchiv

Hitler and leading Nazi party member Rudolf Hess were at the ship’s launch, with Hess giving a speech. She was named the Horst Wessel, who had been a hero German storm trooper and after which an anthem of the Third Reich was also named.

Tido says that he remembers how Hitler went aboard the ship once, but the soles of his boots were fitted with nails and he scratched the deck wherever he walked. However no one dared to raise it with him.

The Eagle wasn’t used in active service until 1942 when she was deployed to the Baltics. When the Allies liberated Europe, the British Navy seized the Horst Wessel and Tido and his comrades were taken as prisoners of war.  She set sail for America in 1946 with an American crew, assisted by her original German captain and a few remaining German sailors, until she arrived in New York.